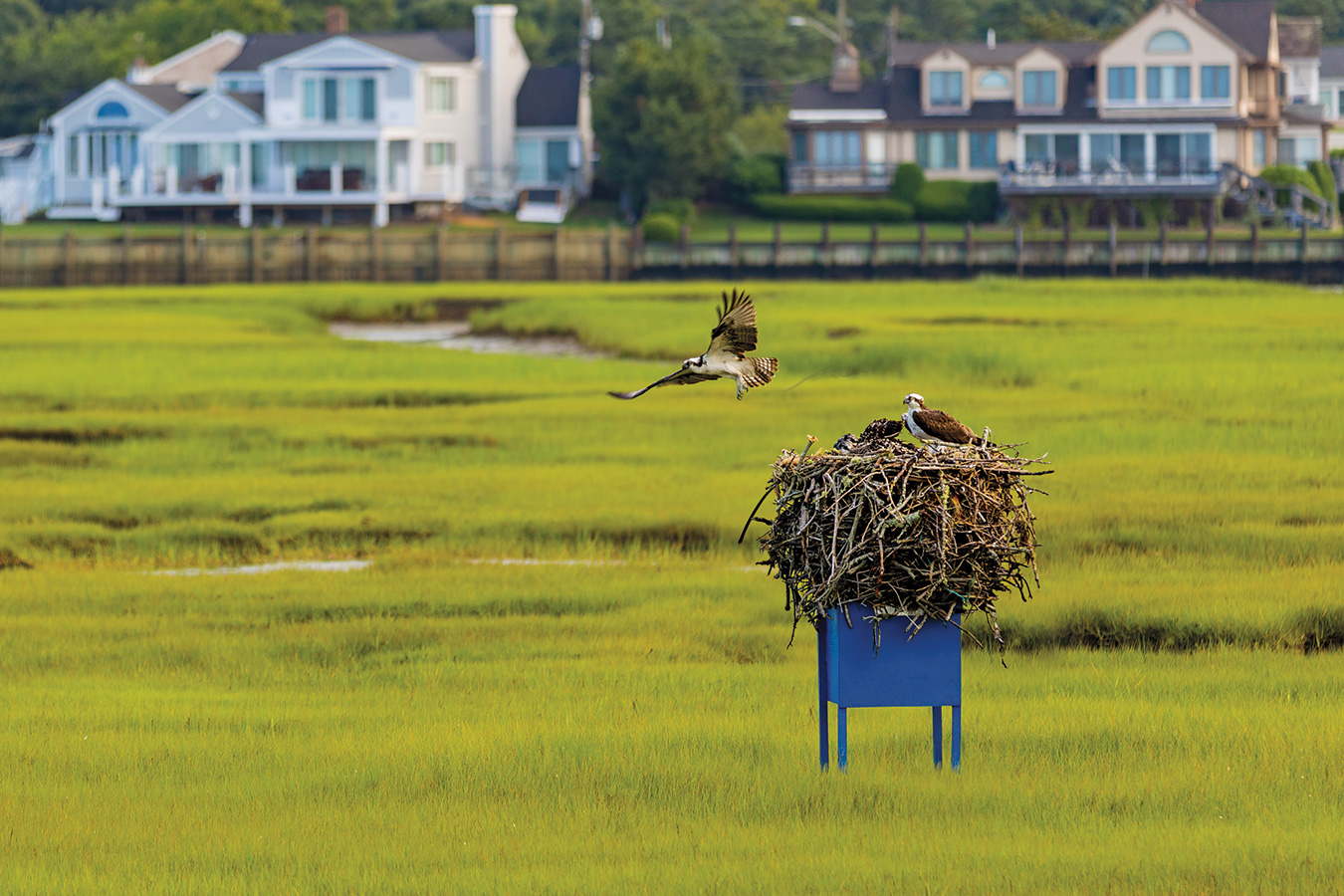 As the weather warms up, visitors throng to Cape Cod and the Islands. But humans aren’t the only ones flocking to our shores. After wintering in southern climes, hundreds of ospreys migrate to the Cape to mate, give birth, and fledge a new generation of magnificent raptors.

Bird lovers don’t have to look far to see ospreys. These majestic birds, with their brown backs, white undersides, and five- to six-foot wingspans, can be spotted throughout the region circling over saltmarshes, ponds, and bays in search of fish and caring for chicks in large stick nests.

But it hasn’t always been that way. Fifty years ago, ospreys had practically disappeared from Massachusetts skies. Along with several other species of birds, ospreys were nearly wiped out by DDT, a potent pesticide. DDT thinned the eggshells of ospreys, bald eagles, peregrine falcons, and other large birds of prey, preventing chicks from hatching successfully. By the time the federal government banned the use of DDT in 1972, few ospreys remained.

“Their populations had really plummeted,” says Mark Faherty, science coordinator at the Mass Audubon Wellfleet Bay Wildlife Sanctuary. “There were only one or two pairs left on the Cape.”

Since then, osprey populations have soared, headlining one of the greatest success stories in modern environmental history. Thanks to the ban of DDT, the passing of the Endangered Species Act, and volunteers building nesting platforms, ospreys are thriving. “The population has increased exponentially, and as far as we can tell it’s still very much a growing population,” Faherty says. “These birds can live 25 years, and many are producing one or two chicks each year.”

Currently there are at least 800 ospreys on Cape Cod, 400 on Martha’s Vineyard, and 40 on Nantucket, according to estimates from Mass Audubon.

“Ospreys are my favorite local human intervention success story,” says Liz Dengenis, naturalist and educator at Mass Audubon’s Felix Neck Wildlife Sanctuary in Edgartown. “From near extinction to rebounding like mad, these birds remind me of the immense ability of the natural world to regenerate when allowed to do so.” 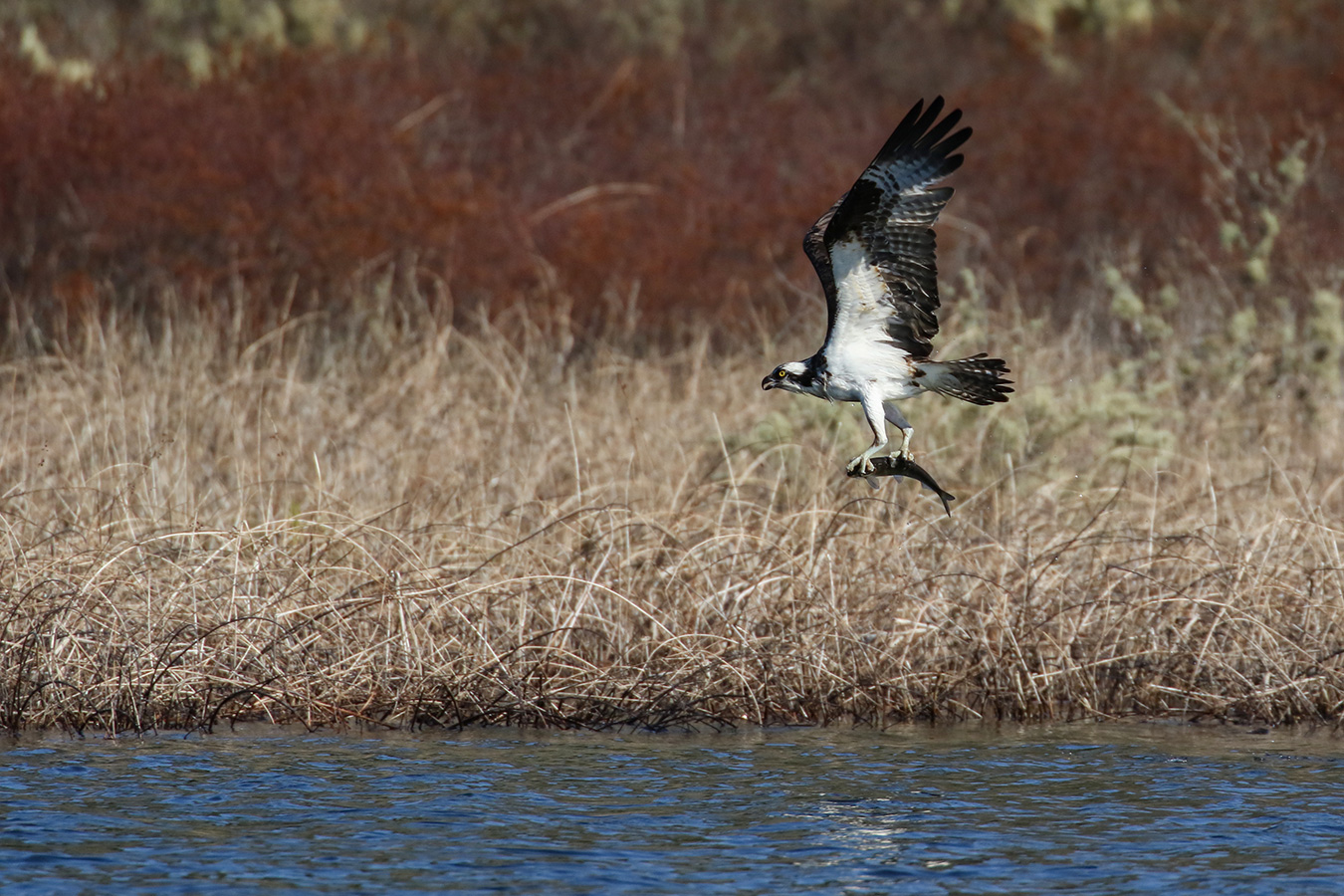 ”The population has increased exponentially, and as far as we can tell it’s still very much a growing population. These birds can live 25 years, and many are producing one or two chicks each year.

Ospreys build large nests—as wide as three to six feet in diameter—out of sticks and other materials. Because their diet consists almost completely of fish, they build nests near water and are naturally drawn to the abundance of waterways in and around the Cape and Islands.

Ospreys typically build nests high off the ground in spots that offer protection from predators. They nest in trees but are also drawn to human-made structures such as utility poles, cell phone towers, and even light poles over playing fields (such as Eldredge Park in Orleans, home of the Orleans Firebirds).

“The predation rates with nests on artificial structures are very low,” Faherty says. “Raccoons are not climbing a cell phone tower or utility pole.”

However, utility pole nests can endanger the birds with risk of electrocution and cause trouble for towns and utilities when nests spark fires and power outages. When necessary, utility companies remove the nests, but migrating ospreys typically return to sites they’ve used in the past and just rebuild. However, if the birds have another good nesting site nearby—such as a specially designed nesting platform—they may relocate.

Several local organizations have stepped in to help lure ospreys away from utility poles. In Falmouth, for example, concerned residents have formed The Osprey Project, which builds alternative platform sites for safer nesting. 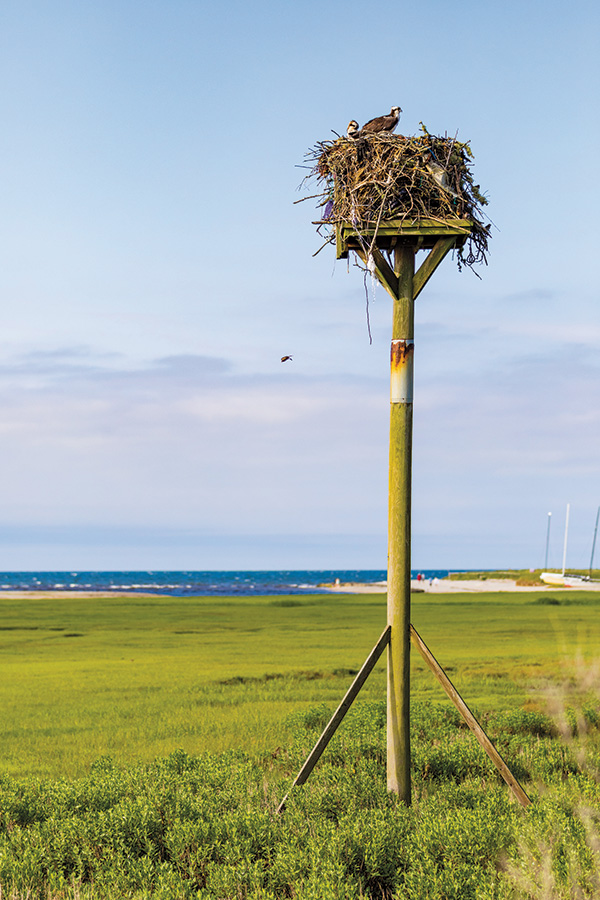 Ospreys have many fans among bird lovers, in part because of the visibility of their nests. “When people think of birdwatching or ‘birding,’ it is often about seeing as many different species as you can,” Dengenis says. “But with osprey monitoring, it’s almost the opposite. You are spending time with a specific pair of birds, identifying the species in a variety of ways: flying, resting, hunting, and incubating. Instead of a quick glance and putting them on a list, you are building a relationship. People often talk about the birds they are watching as if they are their neighbors or friends.”

How can you find ospreys on the Cape and Islands? “Oh, just open your eyes,” Faherty says with a laugh. “Look at tall structures on the landscape. And when you pass a salt marsh, look for poles with platforms on them.” On the Cape, the osprey population is especially dense in Bourne, Falmouth, Mashpee, Cotuit, and Osterville. On Martha’s Vineyard, there are active nests all over, including at Felix Neck, Oak Bluffs Harbor, and Chappaquiddick. On Nantucket, look for nests at Sanford Farm, Ram Pasture, and the UMass Boston Nantucket Field Station.

Once you find an active nest, you’ll soon spot soaring ospreys. While they’re gliding overhead, note the marked kink in their wings, which forms a very distinct M-shaped silhouette. And when they’re perched—sitting down—they typically have their backs parallel to the ground instead of perpendicular like most other hawks.

Watchers love to observe the birds as they hunt for fish. “They are the perfect anglers,” Dengenis says. Ospreys circle and hover over water; then dive down and pluck fish from the water with their sharp talons. After a successful catch, they fly off, shifting their legs to position the fish headfirst to lessen wind resistance. “It’s insane to watch them emerge from the water as if they are just grabbing a snack off a shelf,” adds the naturalist.

To learn more about osprey and other birds on the Cape and Islands, visit Cornell University’s popular All About Birds website, allaboutbirds.org, and Mass Audubon’s website, massaudubon.org. If you’d like to volunteer for a Cape-wide nest monitoring project, contact the Wellfleet Bay Wildlife Sanctuary. 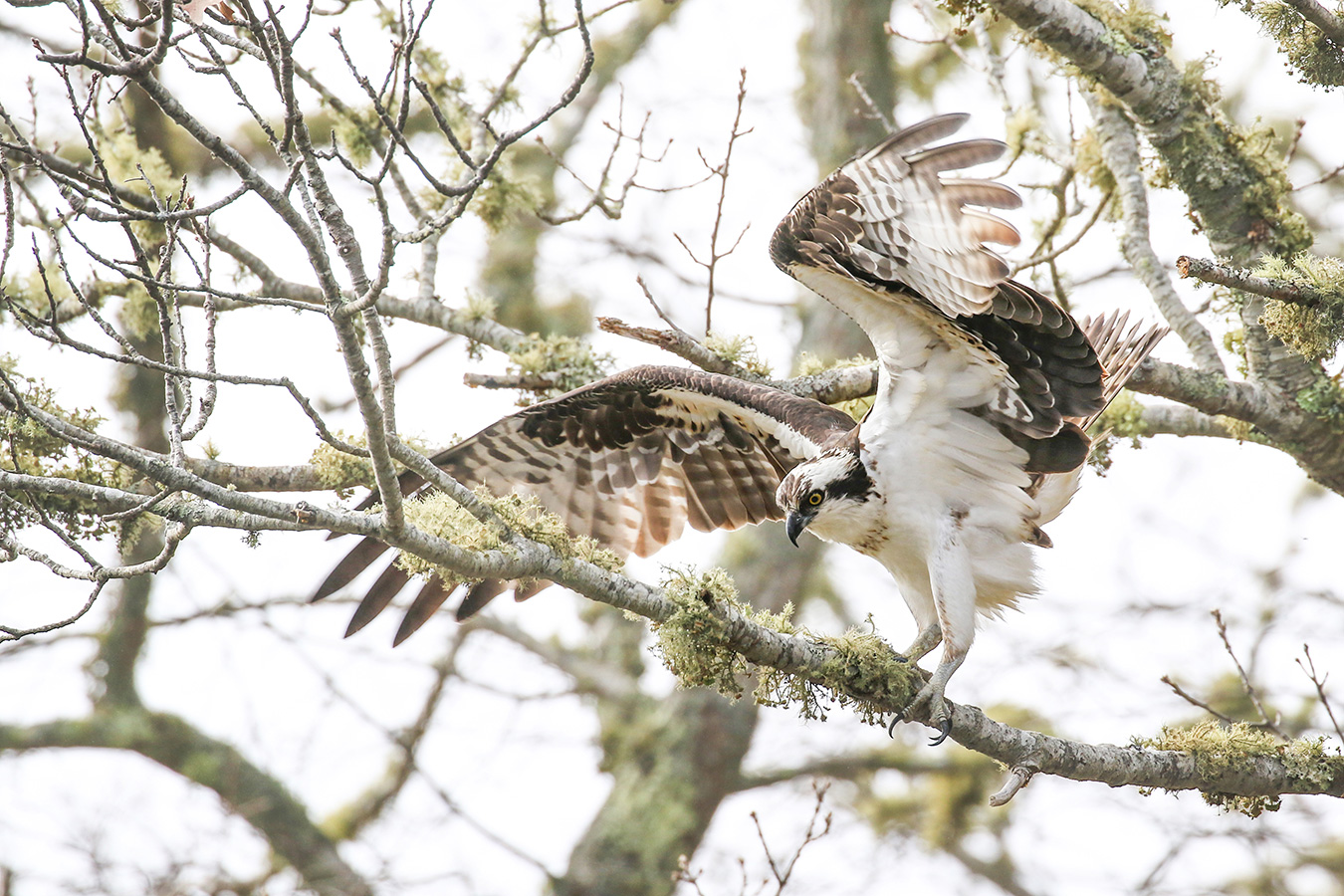