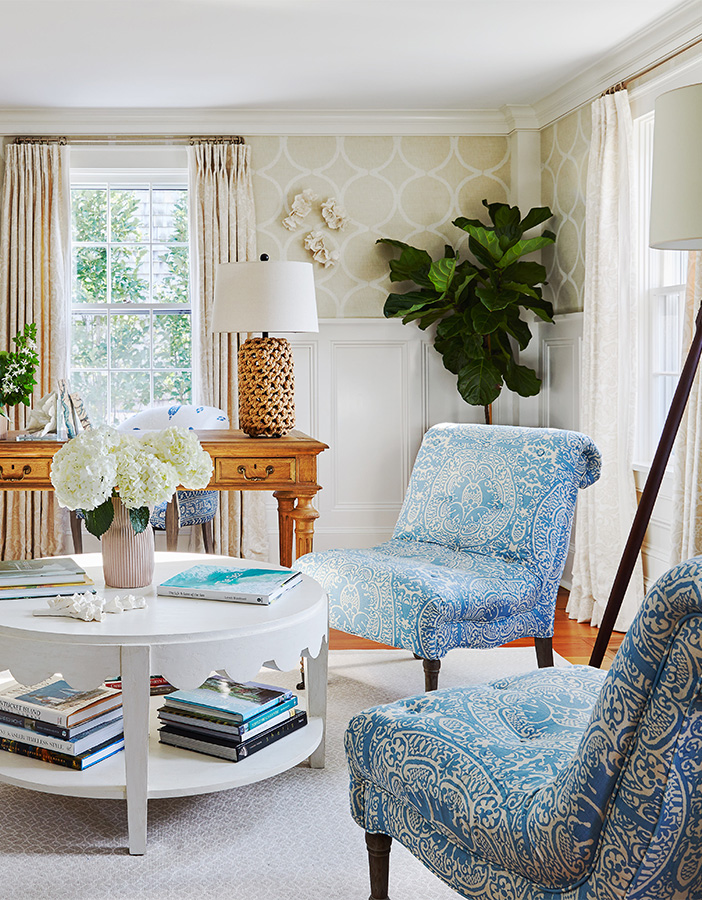 HOW TO ACHIEVE TIMELESS SEASIDE STYLE

Interior designer Donna Elle knows a thing or two about life by the coast. “The sea and all that it represents has always called to me,” says Elle, who grew up summering on Rhode Island’s shore. She established her design career—and raised a family—on Nantucket after falling in love with the island on spring break during her freshman year of college. For over 40 years, she and her island home enjoyed a symbiotic relationship.

With an impressive portfolio of luxurious seasonal retreats and year-round homes, many of them on or near the water, Elle is intimately familiar with seaside spaces. “I followed my intuition and built a thriving business founded on what I call coastal style,” she explains. “For me, this style is a sensibility and an awareness. It’s being tuned into the nuances of island life, of the ocean, the wildlife, the quality of light, the air. It’s something you carry with you even if you move far from the sea.”

Having watched coastal-themed furnishings and textiles evolve from not even being recognized as a design category during the ’80s, to simple facsimiles of seashells during the ’90s, to white-washed furniture and pickled paints in the 2000s, Elle says it’s now a thriving segment of the market. “It’s captured people’s attention for sure,” she says, adding that today’s iteration is a far more sophisticated mix of woven textiles, quality home goods, and customized pigments.

To Elle, coastal isn’t just a look—it’s a lifestyle. Here are her tips for letting seaside speak in your home.

Do you want to feel invigorated or calm inside your home? Do you want a room to stimulate conversation or encourage quiet? These types of questions come first, before paint colors, rugs, and window treatments. Spiritual design—how you find your core, your center—should drive your decisions. At Donna Elle Design, we require clients to share how they want their home to feel. Together, we arrive at a list of adjectives that becomes our vision blueprint. 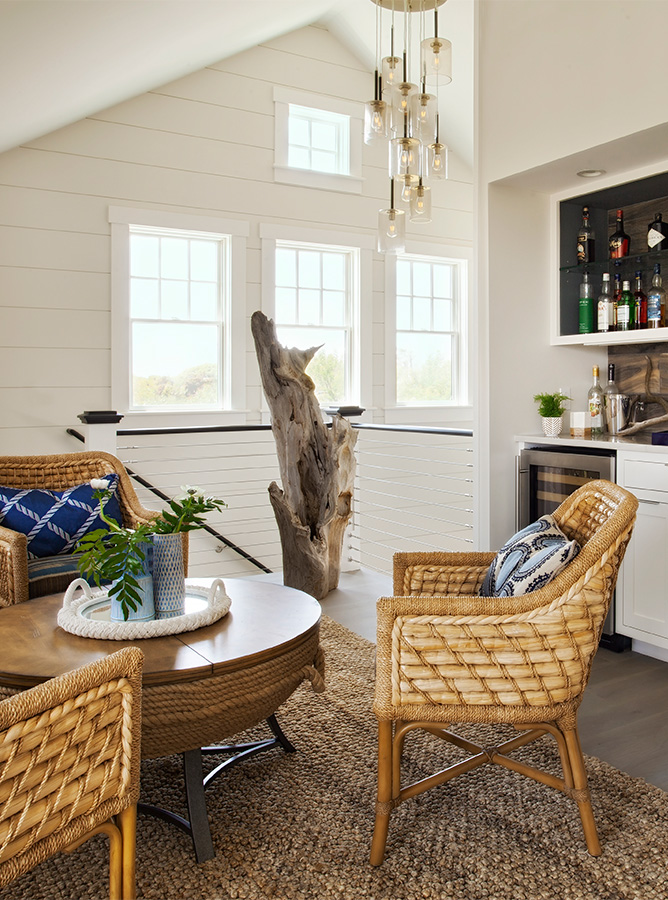 After setting your intention, the most important next step is figuring out floor plans. Determine how your family uses a space and whether a particular room’s goal is privacy or community. Maybe the use is five o’clock wine for the parents while the kids get an hour of TV. Maybe the use is entertaining and conversation. Maybe the use is family time. Ultimately, you want your floor plan to be interesting. Don’t be afraid to let furniture float in a space. Use furniture to create niche destinations within larger rooms.

Discern your color palette from the beginning and stick to it. Color will dictate a room’s intention. Three classic coastal hues are beige, blue, and green representing sand, sky, and beach grass. To me, the vernacular of these colors is tried and true. Be inspired by an ethereal cloud and paint a ceiling in Benjamin-Moore’s “Faded Denim 795.” Evoke the salty waters of Nantucket Harbor with a bathroom vanity in Benjamin-Moore’s “Smoke 2122-40.” Keep the eye engaged with pattern play. 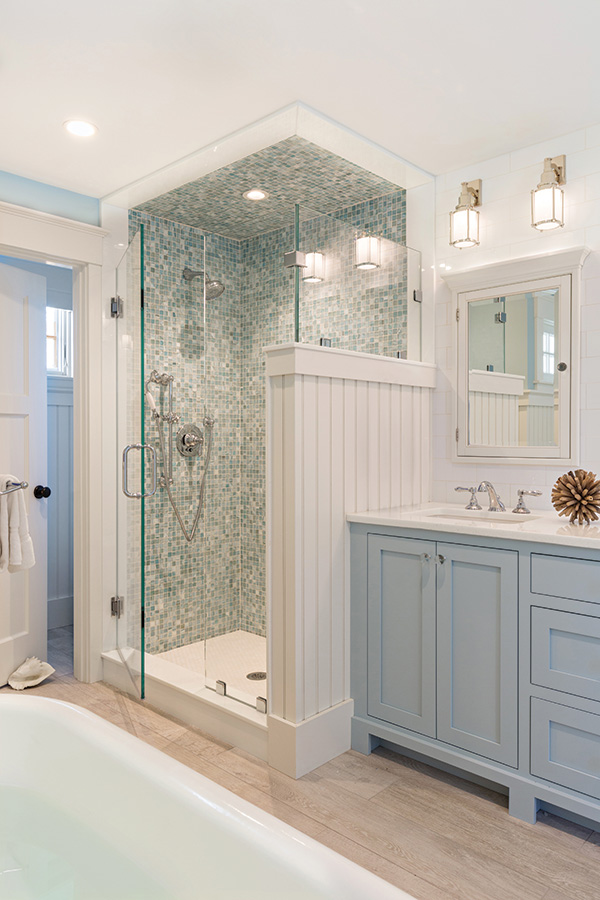 Lighting can change up a room like nothing else. The selection of lamps and shades right now is ridiculous; it’s a designer’s dream. Skip the recessed cans and opt instead for semi-flush mounts, pendants, sconces, and table and floor lamps. Seek out bamboo or wicker lamps in unusual shapes. Place statement chandeliers in a living room if the ceiling height allows. Think about creating a mood versus just lighting for tasks. 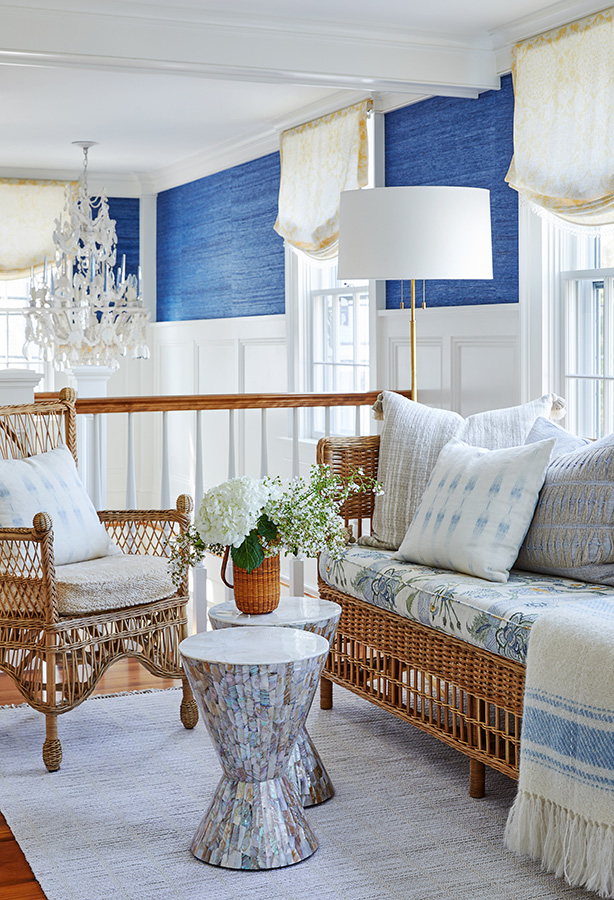 I love anything with depth, anything tactile. Flat or one-dimensional doesn’t have room in my palette. Subtly layer materials such as glass, stone, sisal, abaca, and metals in different patinas. Include an element of surprise like a patterned wallcovering, raspberry cabinet, or dark navy piping. 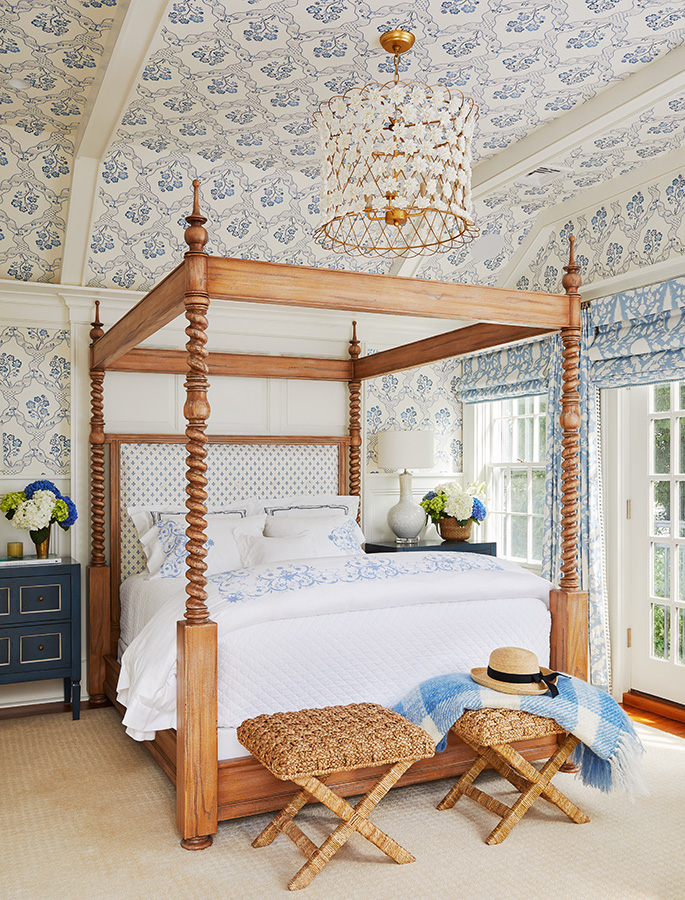 Coastal tends to be more casual, so I prefer sofas without skirts and open-armed chairs with a natural wood finish. You don’t want furnishings to be fully upholstered and skirted and heavy. Mix it up and keep things personal: pair caned or bobbin-armed chairs with your grandmother’s reupholstered side chairs.

Meander in a paint store and select four colors from the display that speak to you. Don’t think about why you like them—just go with it.

Purchase sample sizes in latex flat (and get a few foam brushes—no need to invest in a fancy brush for this exercise).

Stroke the pigment on a piece of 8 x 10 in.
(or larger, if you desire) mixed-media paper or foam core.

Hang these sample boards in a light-filled space and live with them for a few days. See how the color interacts with the light as it changes throughout the day.

When you’ve found your color, seek out a tired-looking room in your home that could benefit from a fresh coat of paint. Paint a wall, niche, or woodwork in the room.