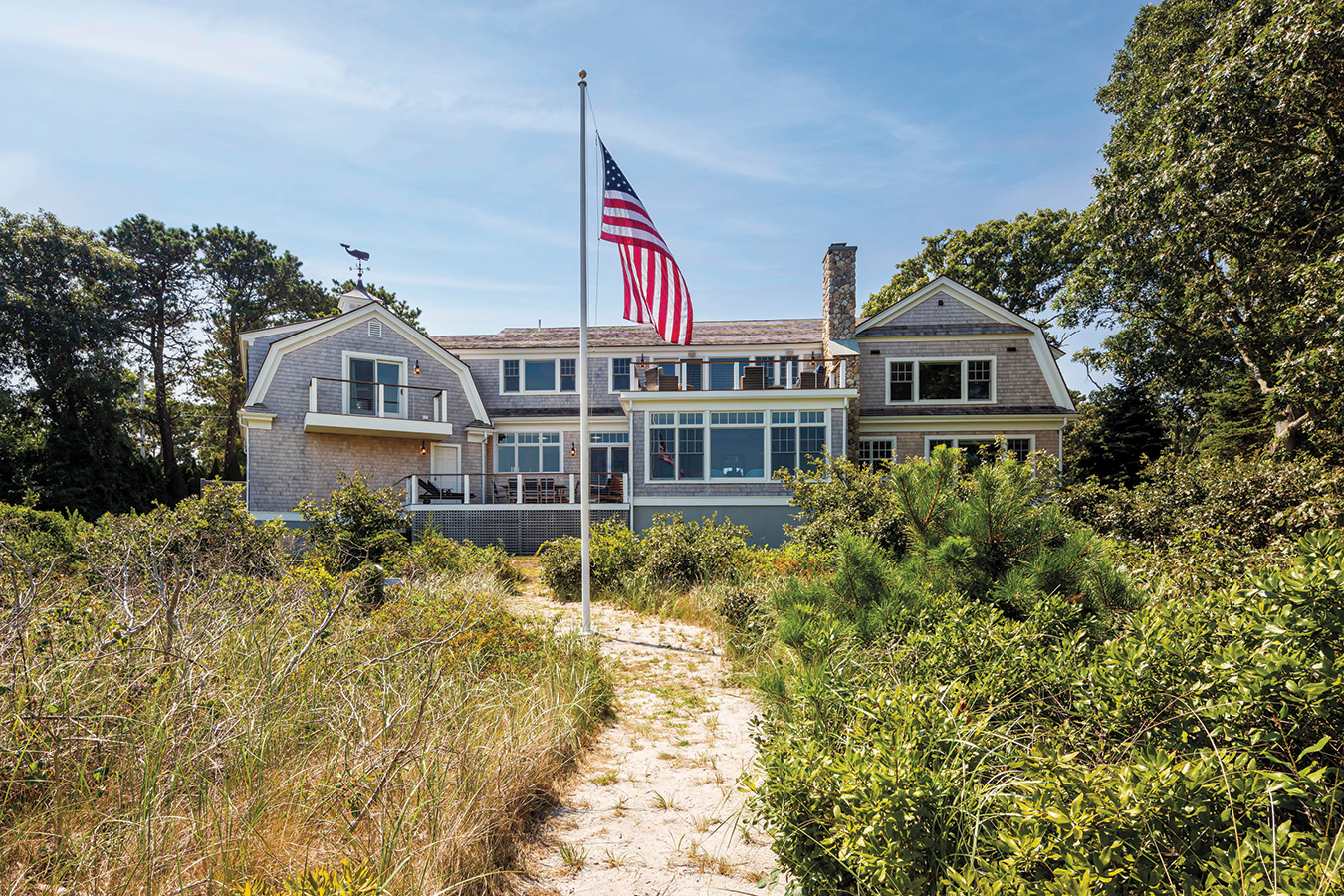 With the help of McPhee Associates, a modest ranch is transformed into a two-story gambrel to maximize water views and family time.

Childhood memories of summers well-spent on the Cape brought Christine and Paul to the area when they were searching for their second home in 2012. When a modest ranch popped on the market, Christine couldn’t join her husband for the showing, but he called her and told her it was the one. The property was on a cul-de-sac just a few roads away from Christine’s brother’s house and had water and marsh views out back. “We bought it before I saw what it looked like inside,” she says.

The interior wasn’t a top priority for Christine. “Once we identified the property it didn’t matter too much what it looked like. I wanted to be on the water and to see the channel and all the activity,” says Christine.

When she was finally able to step into the house with keys in hand, she realized there were some renovations in their future. “It definitely needed updates, and we did some,” she says. Christine and her husband worked with McPhee Associates to design a master suite over the garage right away, but the rest of the house stayed the same. “My husband wanted to renovate before moving in, but I wanted to live in it and see how we used the space first, and I’m so glad we did.” 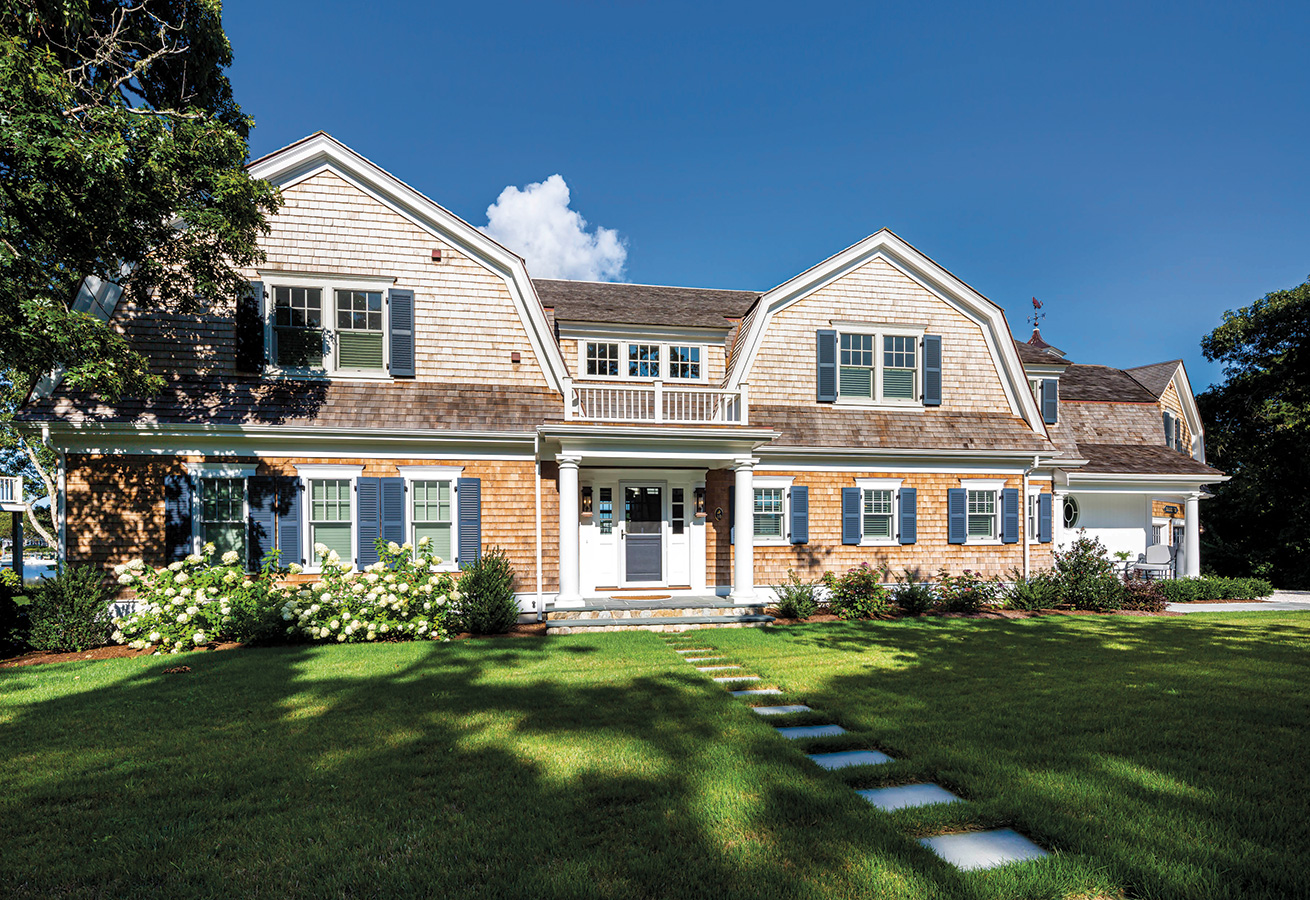 The homeowners worked with architect Karen B. Kempton on the new design before demolition began with McPhee. The house’s footprint stayed the same, and except for the garage with the master suite above, the ranch was completely remodeled with the direction of McPhee Construction Manager Jon Phillips.

Some of the biggest challenges with the renovation included working with new building rules and regulations. “Since the house was constructed in the 1980s, flood zones had changed,” says Sue Contonio, Vice President, Senior Estimator & Project Coordinator at McPhee Associates. “We had to meet new requirements and do a few things like move all mechanicals out of flood zone.”

Once the house was up to code, the homeowners started seeing their vision come to life. “The house’s location is right on the bay, so the homeowners really wanted to maximize the views,” says Contonio. McPhee added walls of windows on the waterside. A few windows were also strategically placed out front, so that when the owners pull up to their home, they can see a dash of blue bay as soon as they arrive. “We wanted all of the emphasis to be on that water view,” says Christine. 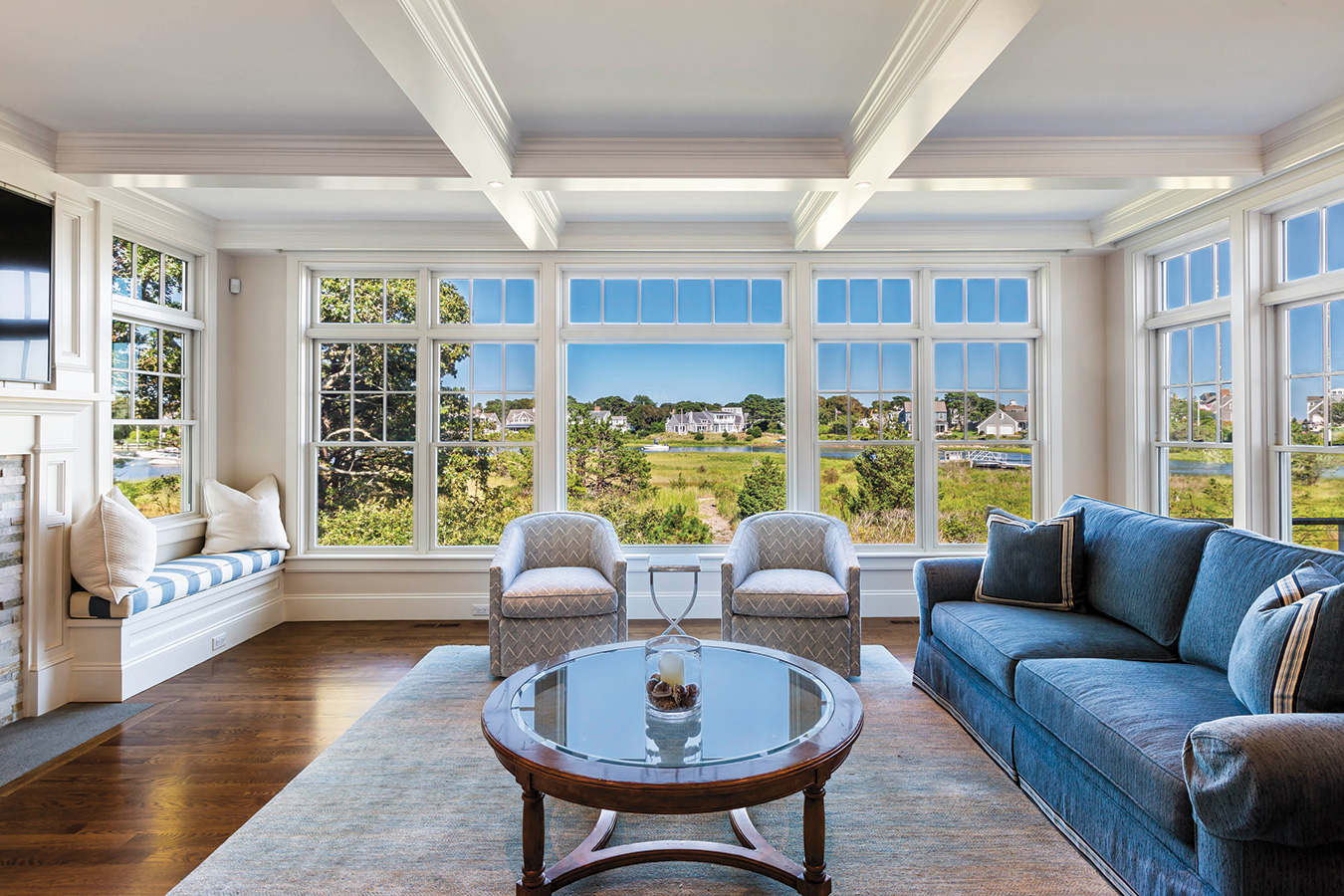 McPhee also added a deck off of the updated kitchen, both of which have become the gathering spaces they were intended to be. “They have four grown children who have significant others, so there are a lot of them visiting often,” says Contonio. “The existing kitchen was a kitchen of its time, and with the updates it’s now open, has more casual seating options, and their views are maximized out to the deck area, which also allows for easy traffic flow.”

The homeowners wanted a home where they could be together as a family, but they also wanted their adult children to have their own space where they could relax, too. “As people get older in life, they are trying to incorporate older kids, so that they can come back and enjoy themselves for the weekend,” says McPhee. “This is really a family house, and they wanted to find ways to accommodate family.”

The second floor of the home was constructed with long-term guests in mind. “The second floor was built in a way that a whole other family could use it, and not feel like they are in the way,” says Contonio. In addition to full bathrooms off of each bedroom upstairs, there’s a washer and dryer as well as a gas fireplace.

Working with interior designer Dennis Coyne of Dennis Design Inc., the homeowners were able to have a little fun with the décor by adding touches of wallpaper, such as coy fish in the powder room and jellyfish in an upstairs bedroom. “I know what I like, and Dennis really picked up on that,” says Christine. “It helped that he had a similar vision, so he was able to listen to what I wanted and then source everything.” She adds, “But he was also very honest, if he didn’t agree with me, he would let me know and then offer another solution, it was great.” 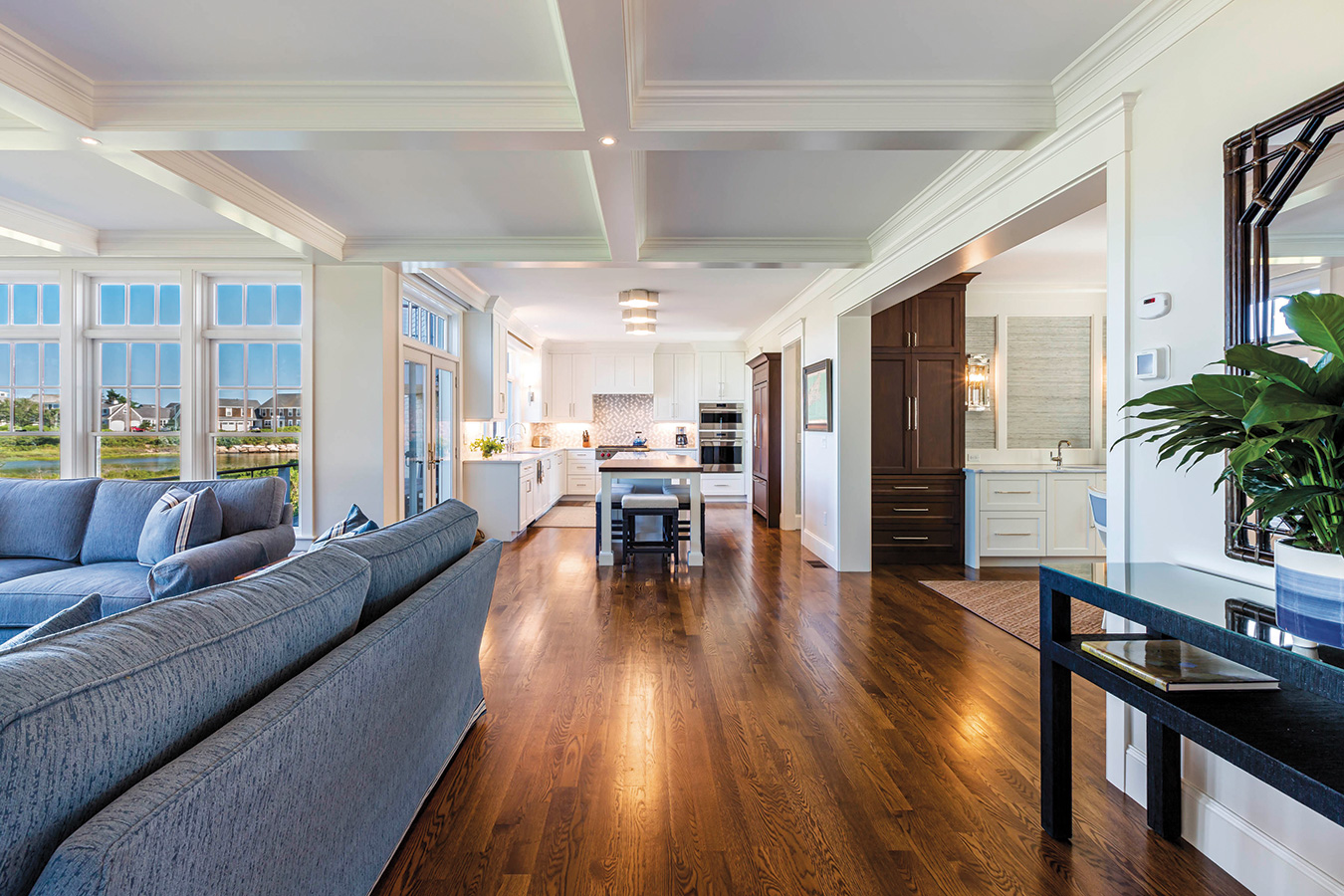 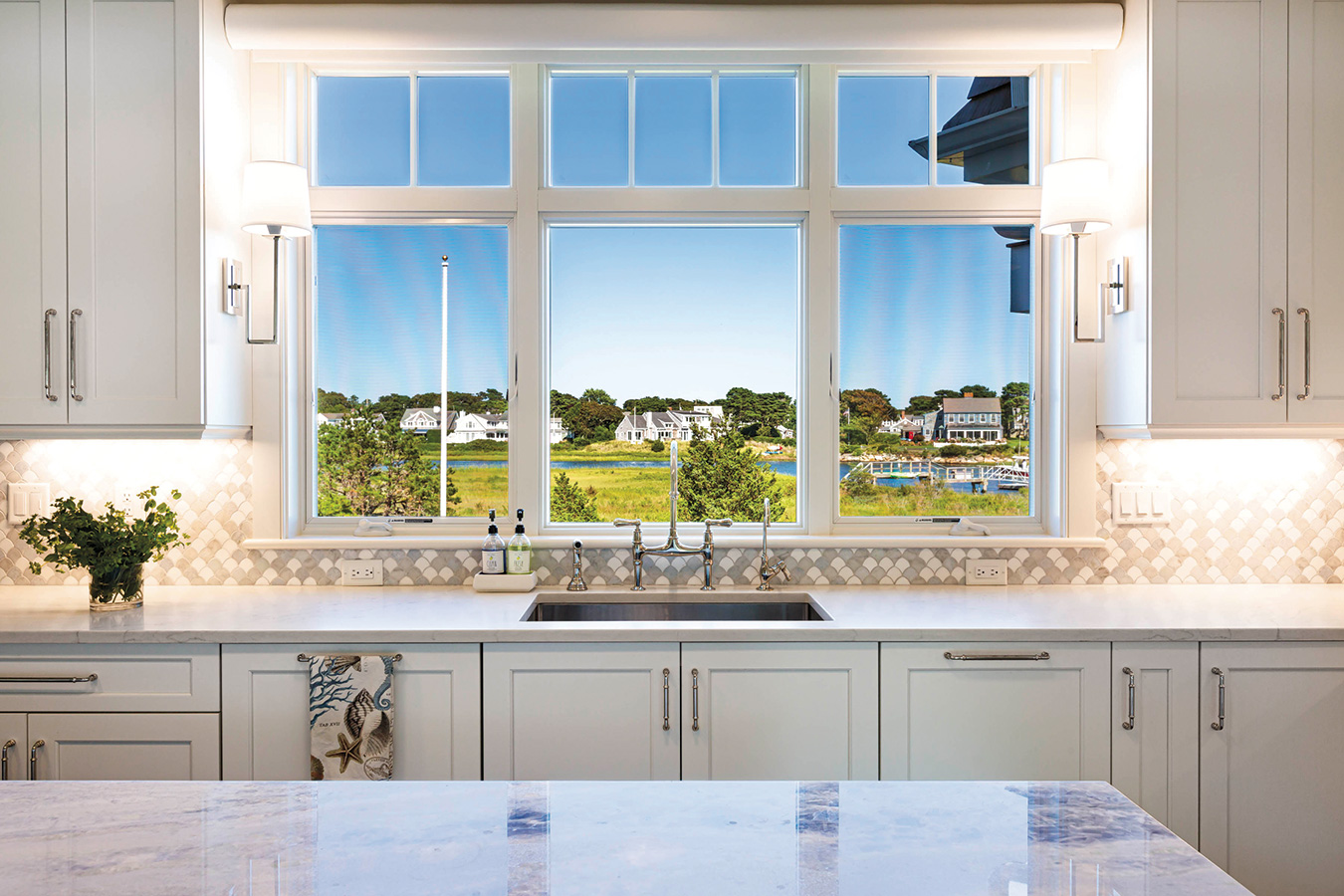 Many of the design choices are a departure from her primary home—they are a little bolder and more fun. “We built our primary home in 1992 when we had one child and another on the way,” she says. “You build a different house when you are building 30 years later. We also had more time and experience to think about selections for this house.”

A feature that can’t be missed is the second-floor boat bar. The vision was Paul’s and he worked with McPhee as well as Horgan Millwork in Hyannis to create a full bar that resembled a boat. “We worked with them on design and approved color, and they really did a beautiful job,” says Christine. “The bar is exceptional, and the wooden top is so nice.” One weekend was spent collecting potential names for the boat bar, and the family landed on “One Particular Harbour,” a nod to Paul being a Jimmy Buffet fan.

So far, the family has enjoyed many weekends and summer days at the home, and they are looking forward to many more. “We like to entertain,” says Christine. “The layout lends itself to fall football, too—you can put the fire on in the fireplace and enjoy.” The deck out back is a great spot after a beach day, and also first thing in the morning. “There’s a lot of sun out there in morning, and it’s amazing to sit on the deck with a cup of coffee and look out at the water,” says Christine. “It’s our happy place. We love how it turned out.” 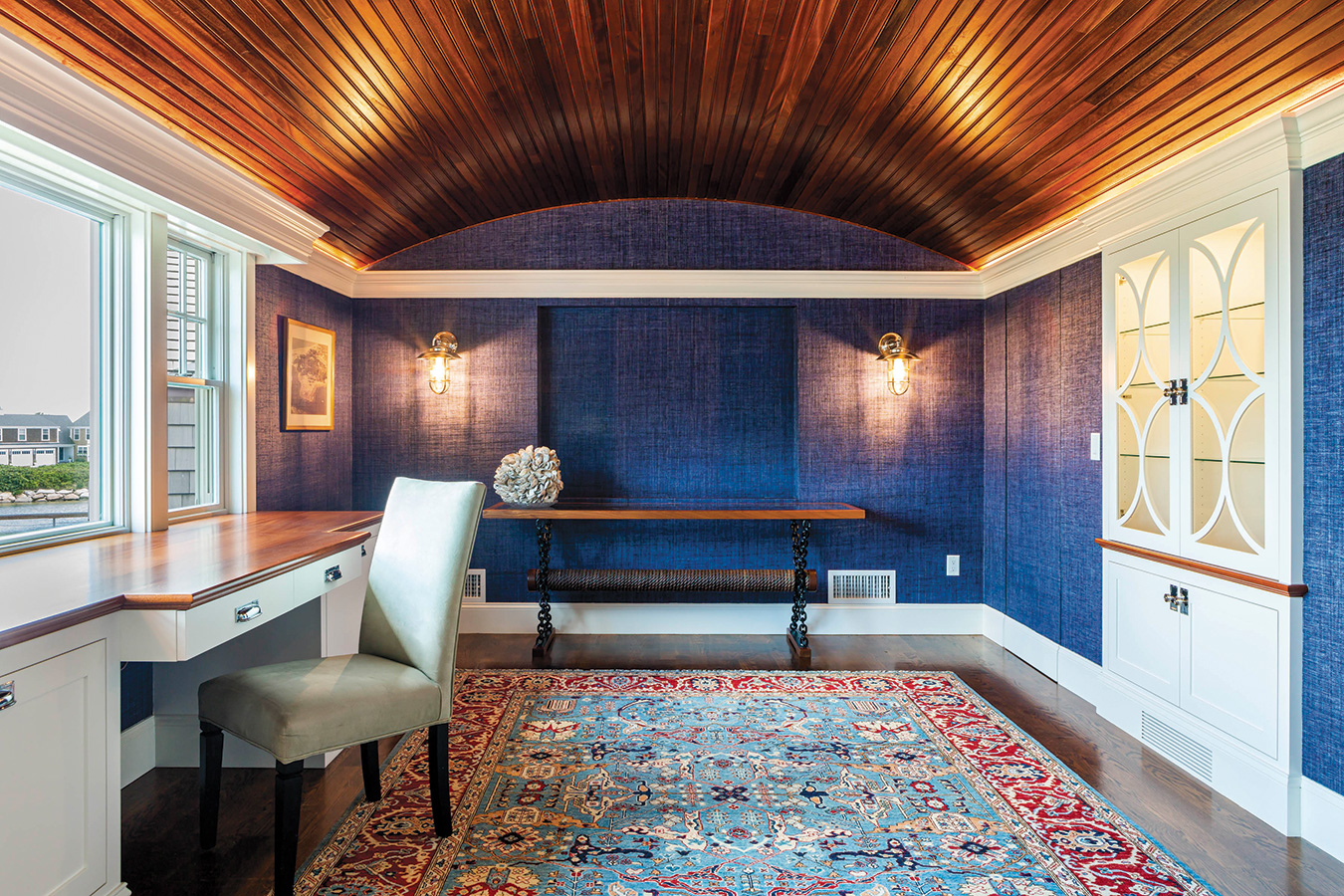 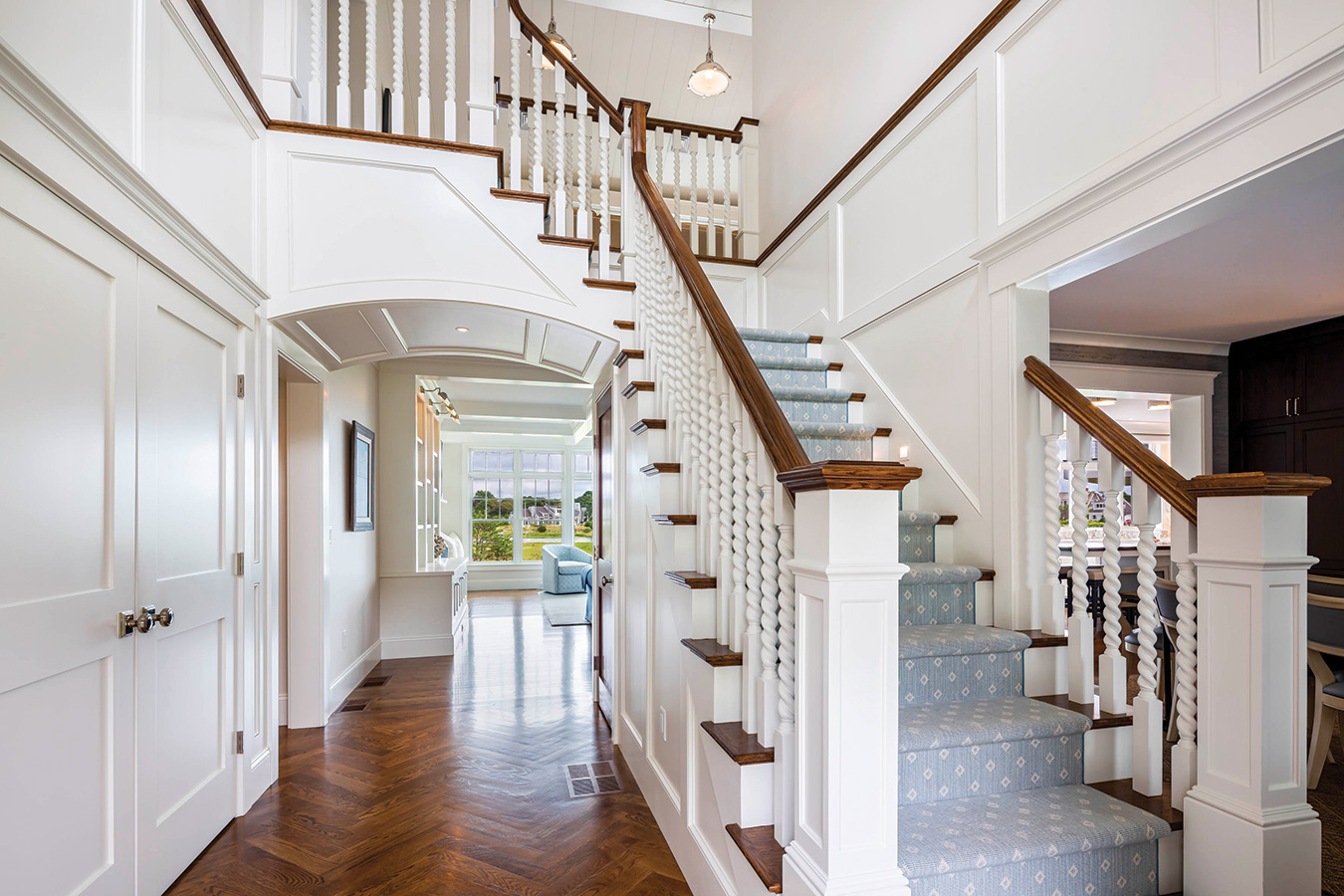