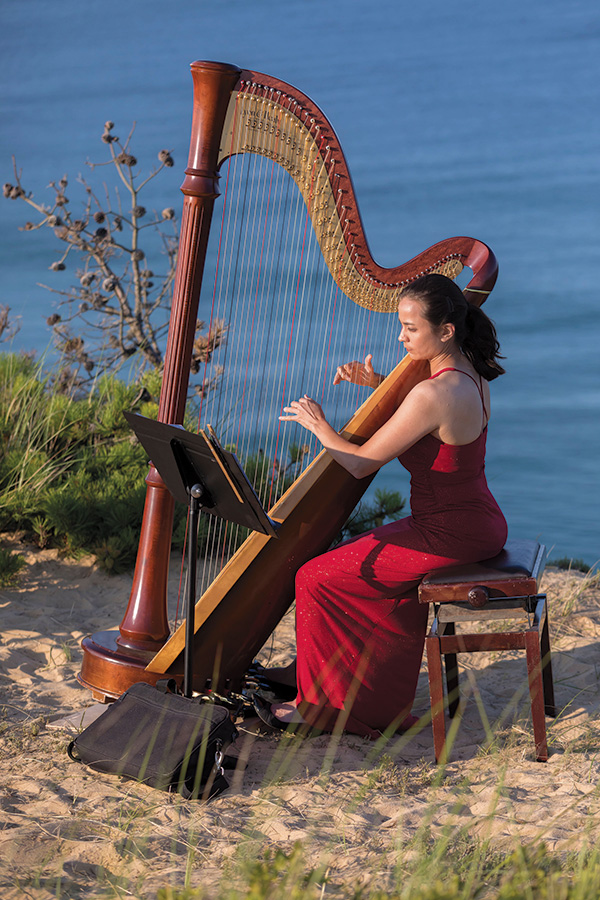 On a balmy evening in June, several dozen spectators are spread across the sand at Corporation Beach in Dennis. Before them, with a stunning backdrop of gentle grey-blue waves, are a small group of classical musicians and modern dancers, performing and moving interpretatively to “The Swans” from Charles-Camille Saint-Saëns’ Carnival of the Animals. The sublime setting, the delicate music, and the expressive gestures combine to create a uniquely transportive experience.

These collaborative artists are part of Beyond The Bounds, a newly formed nonprofit arts organization, whose mission is to promote connection through outdoor performances. “Our goal is to create opportunities to share an engaging experience with each other and with nature,” says founder Naomi Steckman, a classically trained cellist, who relocated from Boston to Cape Cod soon after the Covid-19 pandemic began. 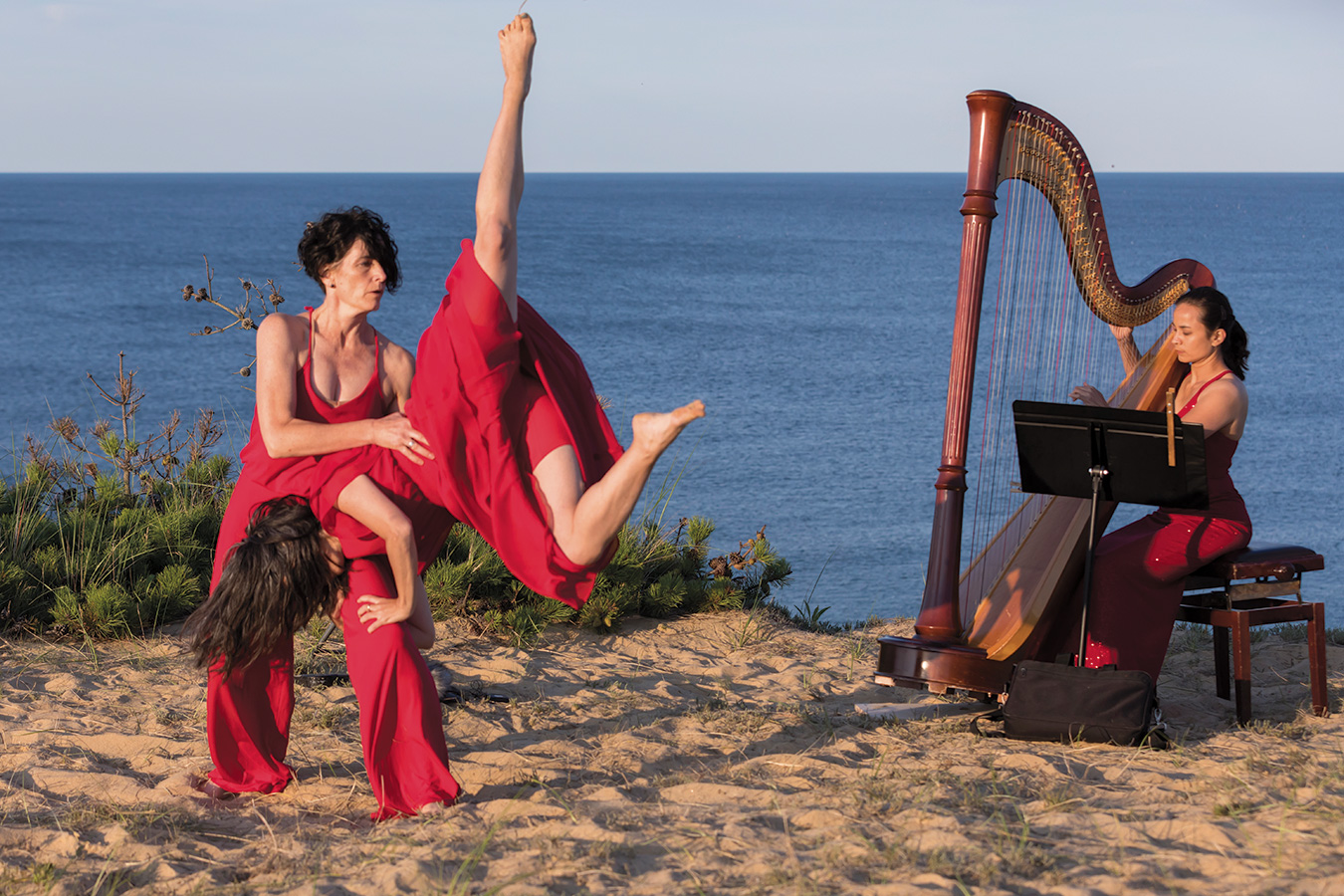 “I’ve played with the Cape Symphony,” says Steckman, “so I knew Cape Cod would be a wonderful place to retreat to, especially after live performances came to an abrupt stop.” Once Steckman was settled in Brewster, she found herself spending an enormous amount of time exploring the woods and beaches near her new house. “I feel most at home outside,” she says. “I’m grounded when I’m in nature.”

The quiet forest also proved to be an ideal practice space, and the experience of playing her cello amid a serene grove of birch trees spurred a new idea. “I was loving being on the Cape, but I also missed being part of an orchestra,” she says. “Auditions just were not happening at that point, but I knew I still needed performance experiences.” 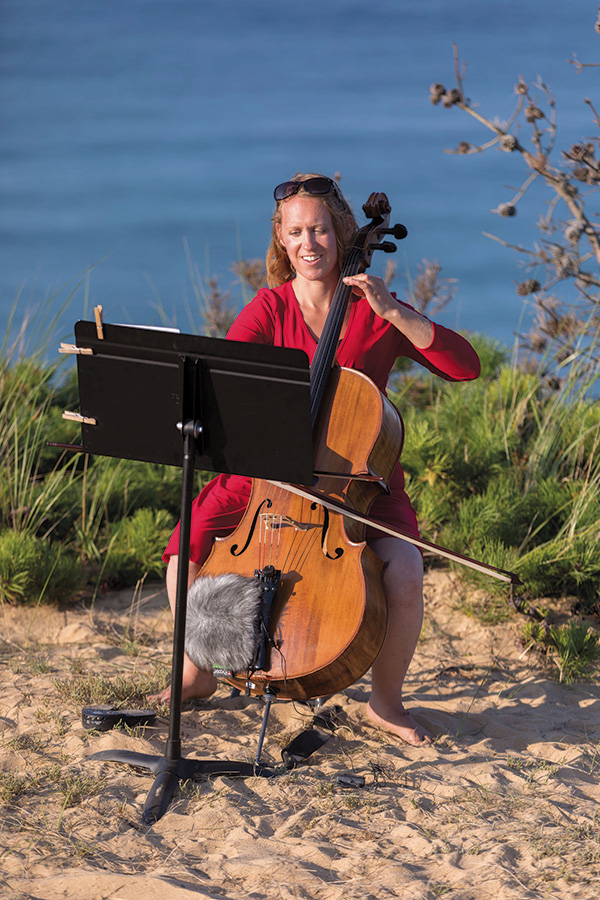 Recruiting several fellow graduates from her orchestral studies master’s program at Boston University, Steckman pulled together a series of pop-up concerts that combined her passions for classical music and the natural world. She also joined forces with another artist, dancer Diana Steinberg, who had been as inspired as Steckman to perform outside. “The pandemic created this driving need to head outdoors,” says Steinberg. “Being, and dancing, in nature felt like a liberation, and it was soul satisfying to connect and communicate with the environment that way.”

After that first event, Steckman formalized the interdisciplinary collaboration into Beyond The Bounds, gaining nonprofit status as well as dedicated audience members. “I think people are really affected by the combination of the exquisite natural beauty of Cape Cod and the creative expression of the artists,” she says. So far, their performances have taken place at town beaches and in the National Seashore. “I’m trying to be intentional about the locations we choose for performing,” says Steckman. “And I think it’s important that the people who happen to be enjoying the natural spaces also get to listen and experience this art.”

With more than three decades of cello playing behind her (she began lessons at age three), Steckman is passionate about making her music accessible. “I believe classical music can touch everyone, which is another reason I am doing this. I think it is something everyone needs,” she says. 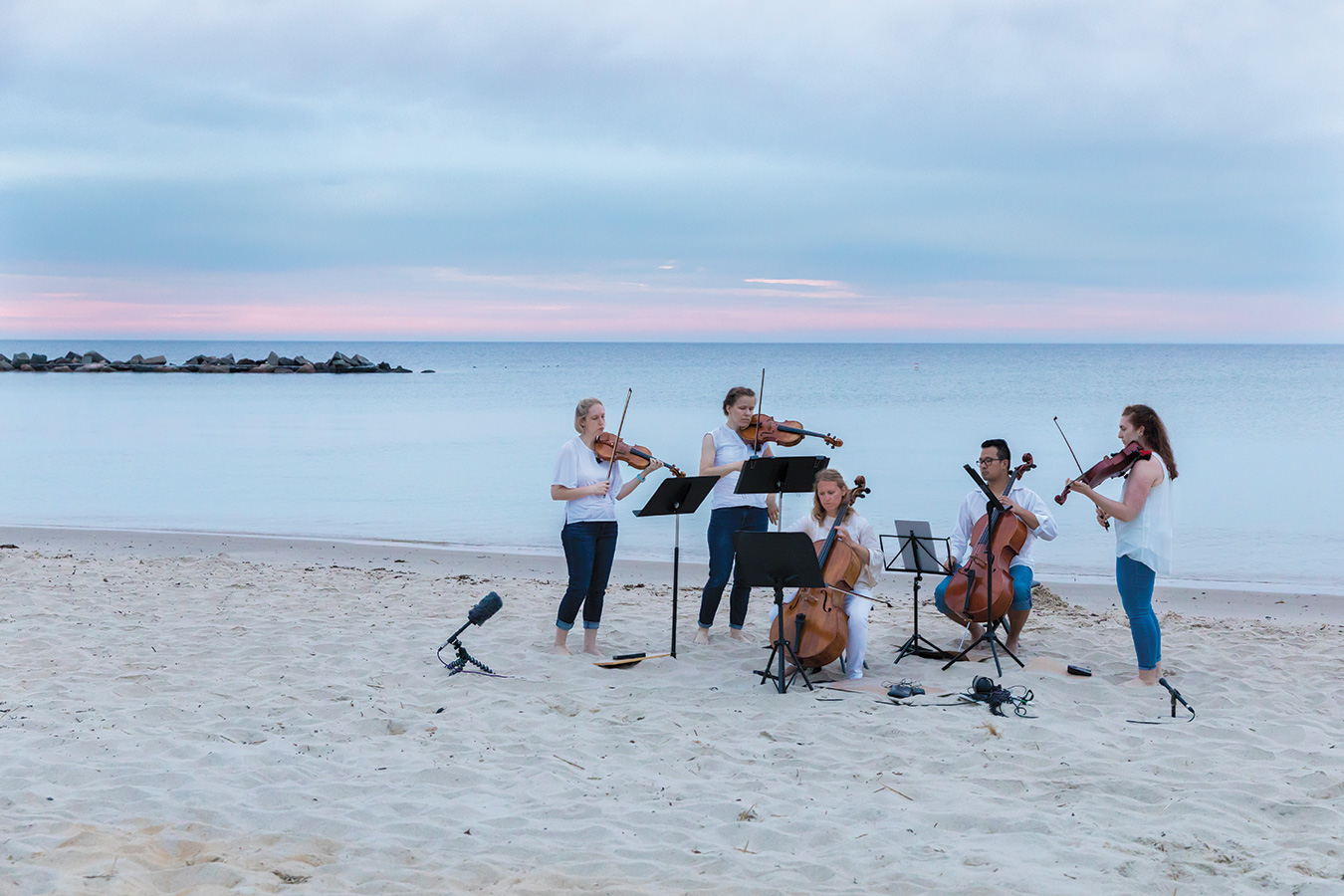 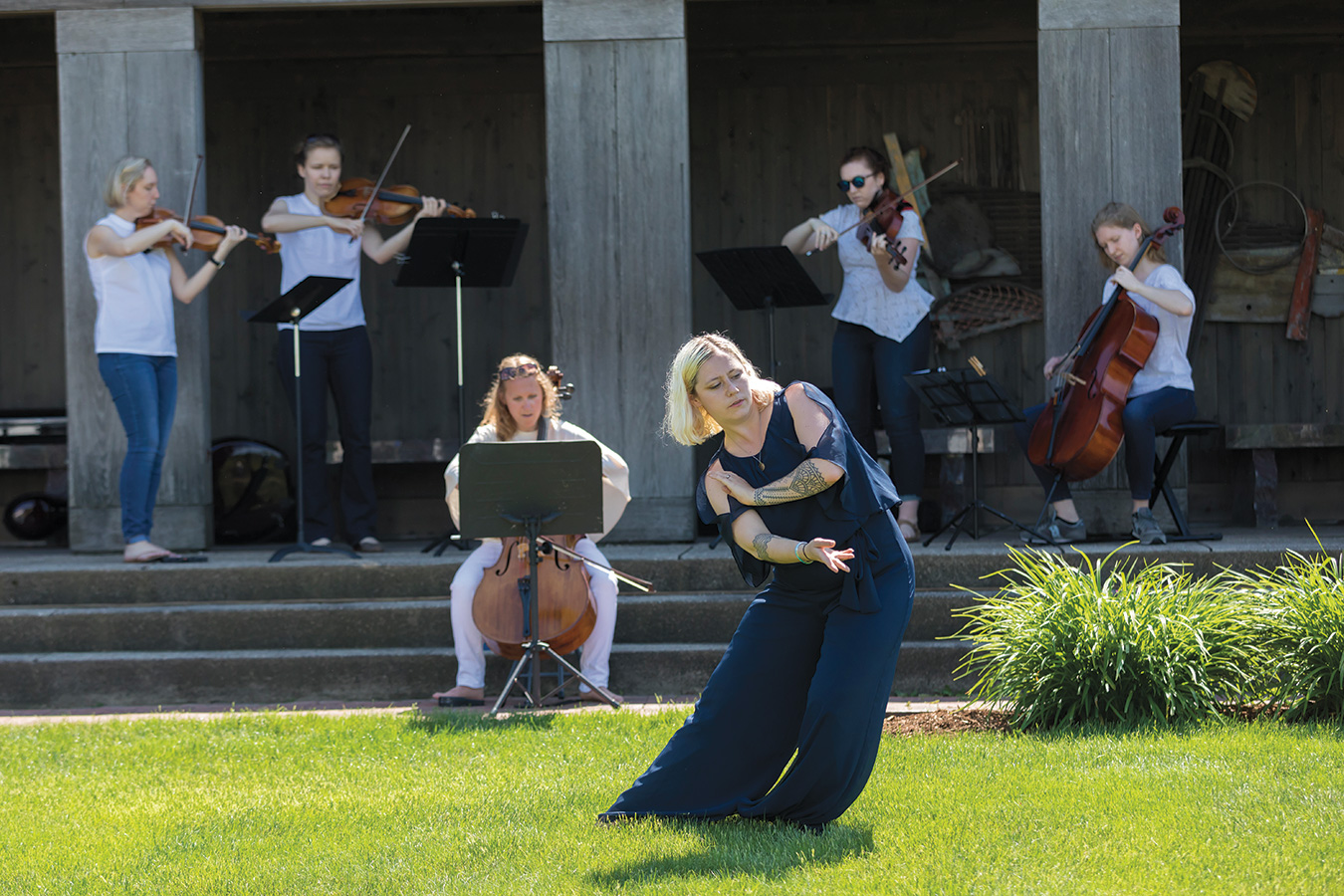 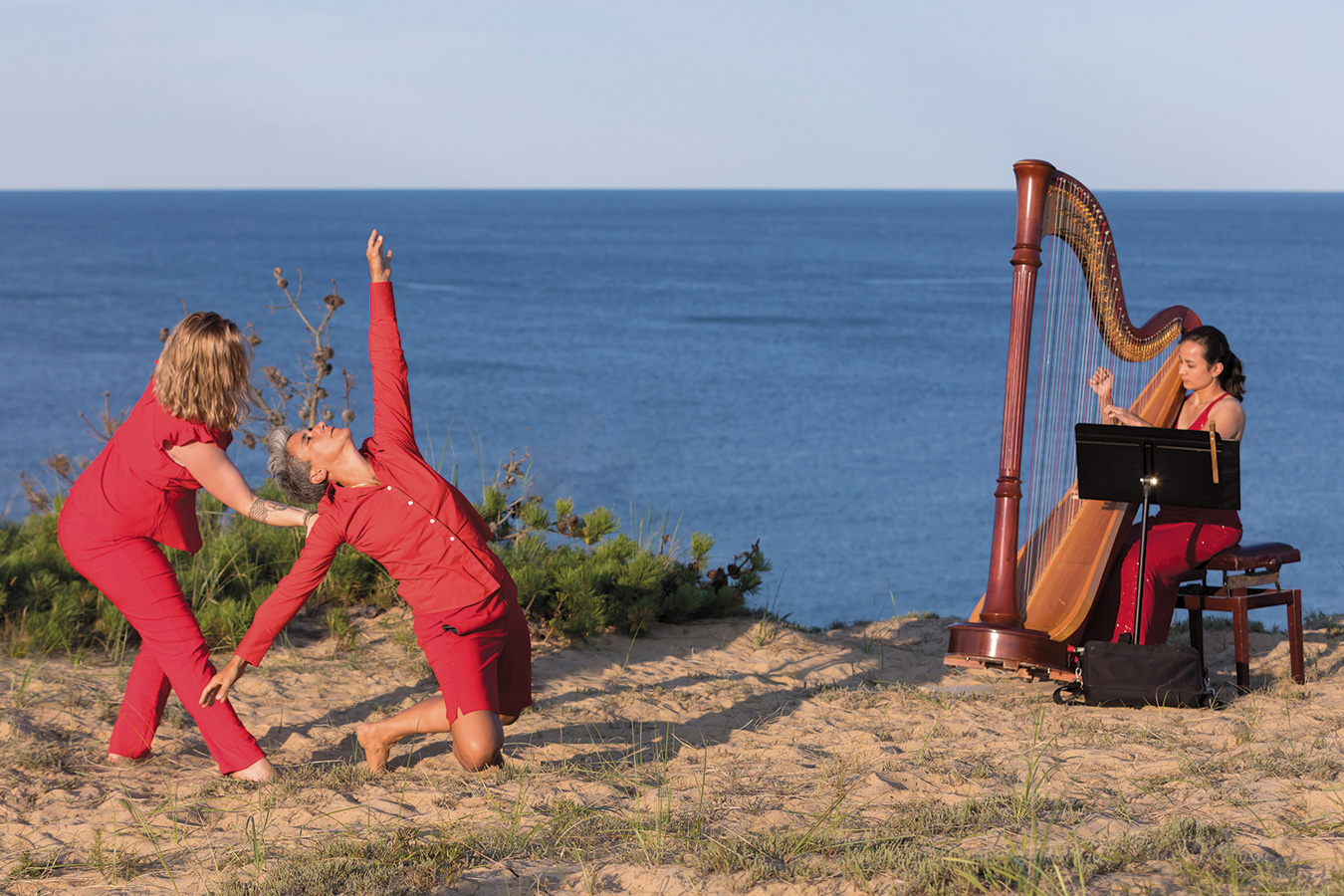 ”When I hear from the audience members and the other performers how much the experience means to them, it keeps reminding me I’m doing the right thing.
This feels like where I need to be.

As concert halls reopen, Steckman has begun to return to playing orchestral jobs, but she remains committed to Beyond the Bounds. Her goal is to raise enough funds to pay the artists and continue offering streaming video of their shows. “When I hear from the audience members and the other performers how much the experience means to them, it keeps reminding me I’m doing the right thing. This feels like where I need to be.”

As the sun dips lower over Cape Cod Bay, the Beyond the Bounds quintet begins the first of two movements from Dvorak’s Cello Concerto in B Minor. The dancers move with emotion as glorious pink and orange tinged clouds fill the sky, and it is easy to understand why Steckman chose this grand piece. “Dvorak wrote this to be about hope and the outdoors, so it truly matches the atmosphere,” she says. “That is our entire goal: to synthesize the music, the movement, and the place, and engage the audience members in that amazing conversation.” 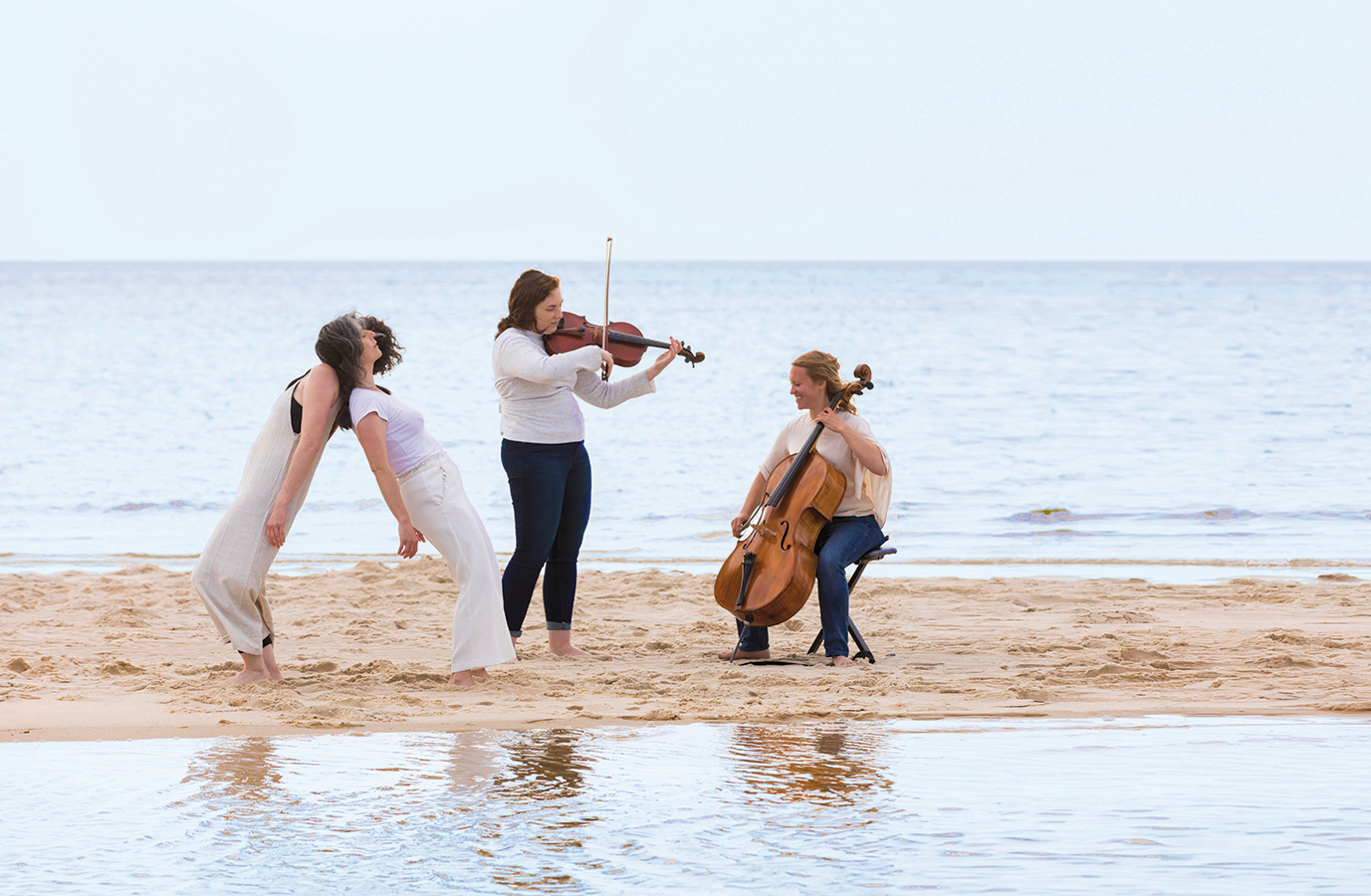 For more information about Beyond the
Bounds and their upcoming performances
please visit: naomisteckman.com