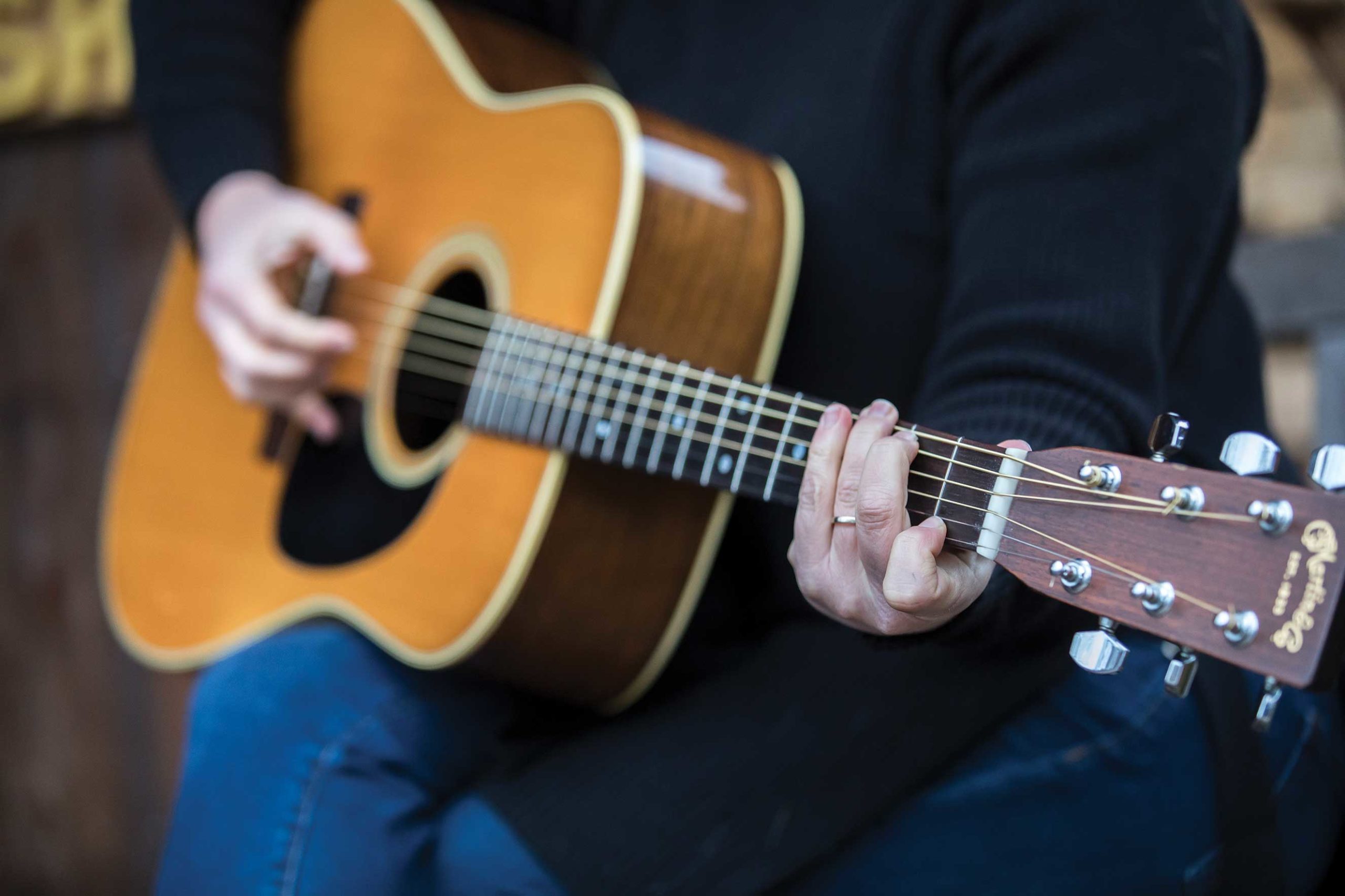 The many talents of
Cape Cod musician Sarah Swain

arah Swain is full of spunk and energy when she leaps joyfully in the air during one of the rousing rockabilly tunes her band Sarah Swain & the Oh Boys plays at packed venues across Cape Cod. However, the talented guitarist and singer displays a more tranquil rootedness at home in the rustic lakeside house in Harwich, which she shares with her husband, three children, three dogs, and two goats.

Perhaps this is because she truly feels connected to Cape Cod in a multitude of meaningful ways. Sitting comfortably near her piano and a wall of vintage guitars, with a view of trees and water behind her, Swain explains that she wasn’t always sure how she would fit in here, having grown up off-Cape. “For the first few years here on the Cape, I was basically known as ‘Swainer’s wife,’” she says, breaking into an infectious laugh. “I was fine with that. It took me a while to settle in and feel apart of this community.” She focused on her home life with her husband Steve, a local steel sculptor, owner of Frying Pan Galleries, and an architectural designer, whose family has been on the Cape for decades.

Then her mother was diagnosed with ovarian cancer. “I spent a lot of time going back and forth to Marblehead taking care of my mom,” says Swain. “After she passed, I kind of hibernated for a while and didn’t connect with much.”

For the self-taught musician and songwriter, it was music that began to pull her into a new Cape Cod life. “My mom bought me a guitar when I was fifteen and I would watch other players and try to remember what their hands were doing,” says Swain. “The chef at a restaurant where I worked was a guitarist, and he would draw out chords for me on napkins so I could practice.”

While Swain grew up in Marblehead, part of her formative youth was also spent in Pennsylvania and West Virginia, which subliminally influenced her sound. “Even though I considered myself a punk rock kind of girl, when I started writing music what came out had a little country twang,” she says. “I fought that for a long time, but really started to embrace it once I was here on the Cape and fell in love with the simplicity, soul, and joy of rockabilly.” 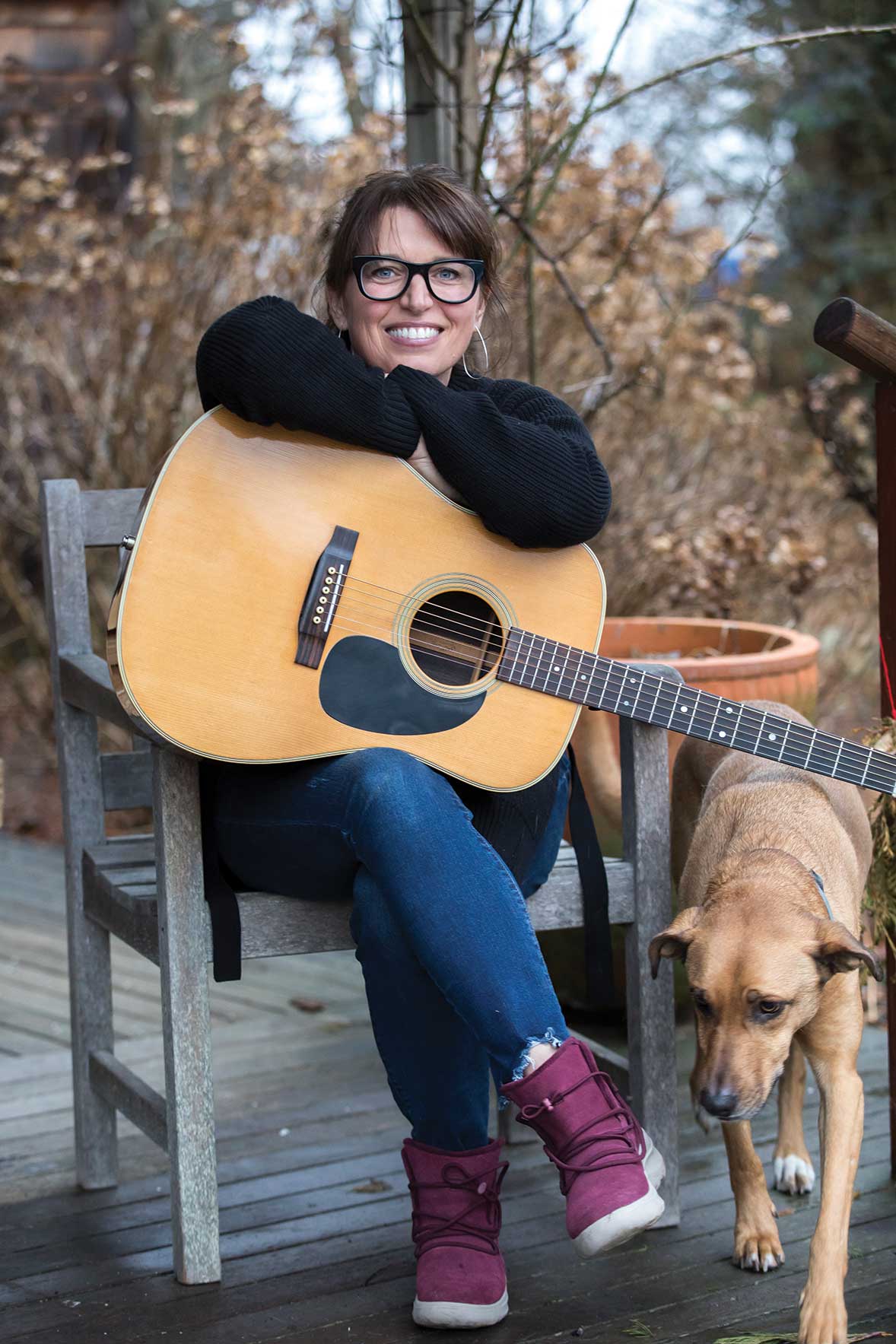 Sarah Swain taught herself to play guitar and write songs when she was a teenager. 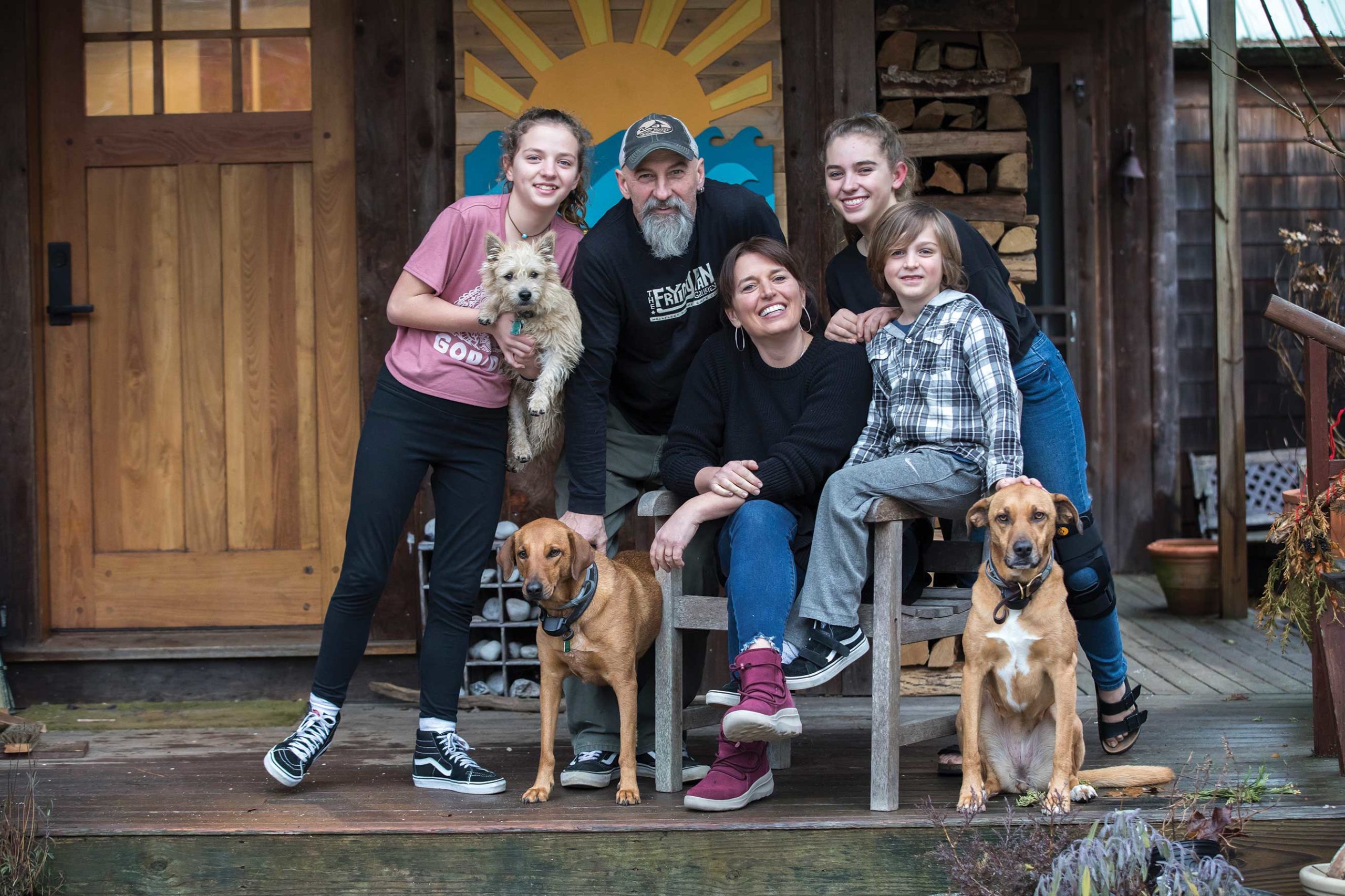 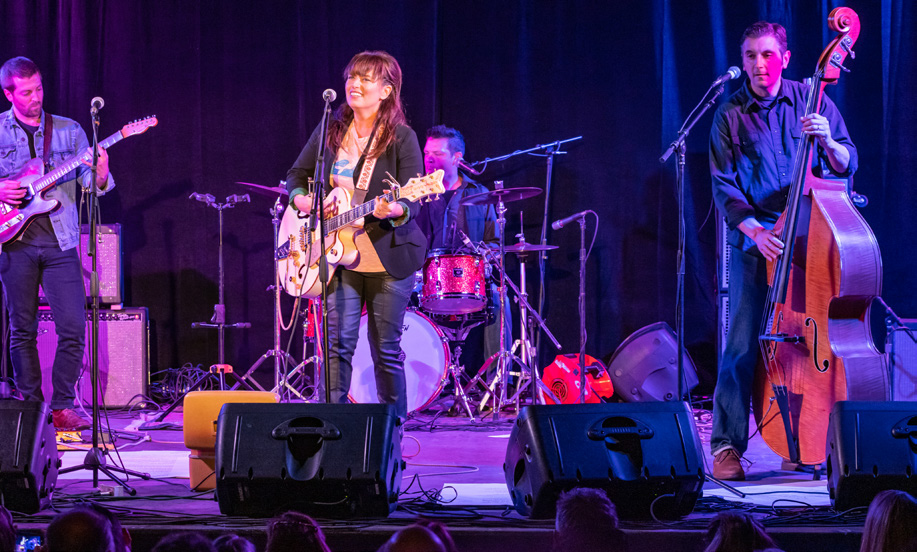 The first local group she joined was a rootsy, rock-and-roll band called the Greenheads, with whom she still occasionally performs. “We play opening night at the Beachcomber in Wellfleet every year, which is seriously the most fun you could ever have.” Swain then joined a rockabilly band called Randy & the Oak Trees which eventually morphed (with some of the original members) into Sarah Swain & the Oh Boys, which performs Swain’s original music. “We’ve been creating, performing, and recording together for over ten years,” she says. “I am so blessed that I get to work so hard and have so much fun with such wonderful players and people.”

Swain talks animatedly about the music scene on Cape Cod, which she has found to be incredibly supportive. “The talent we have here, the visionary songwriting—it really is unbelievable,” she says. “It’s really cool to be part of that and the more we support each other the better, especially female musicians.”

To that end, Swain launched Cape Cod Women’s Music Festival in 2012. “Women musicians are too often pitted against each other, or it feels like a token-girl thing, and I dreamed for a long time about a music festival dedicated to celebrating and honoring female musicians,” she says. “That rattled around in my brain and eventually the rattle got louder.”

Swain had never done more than perform in benefit festivals, but once she took the first step toward creating the festival, she found dozens of people willing to help her bring the idea to life. “The first festival was terrifying. I had never engaged with the community in that way, but so many musicians, local people, and businesses took a chance on it and the whole event was pure magic.” 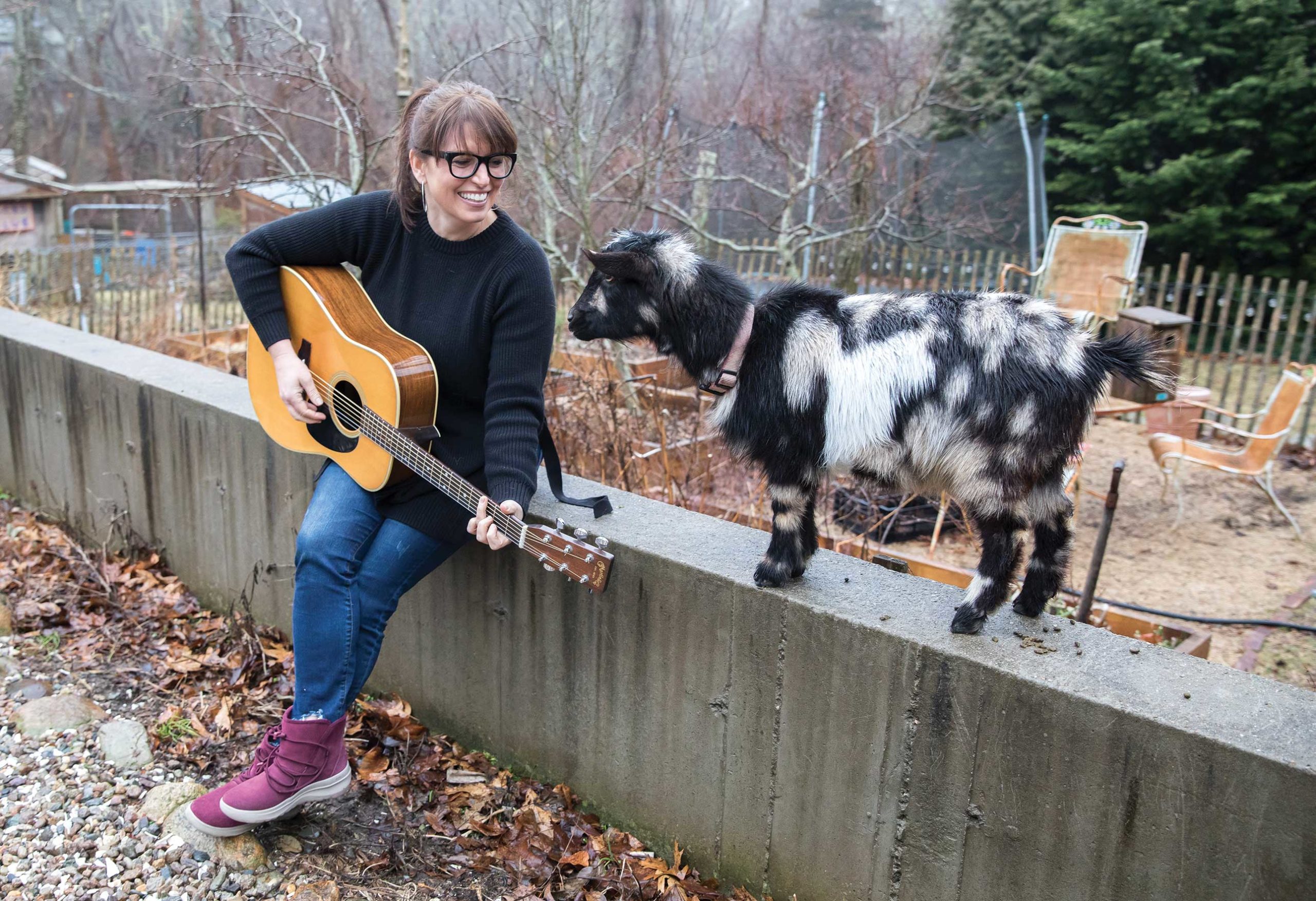 Swain with one of her family’s goats.

The first year of the festival Meghan Trainor, who was still at Nauset Regional High School at the time but already a musical force, was the opening act. She was joined by a lineup of local female musicians who played to a sold out crowd at the W.H.A.T theatre in Wellfleet. The festival is  now in its eighth year, has moved to the Cape Playhouse in Dennis, and has showcased dozens of local and national female musicians. “The festival was essentially started in memory and honor of my mom,” says Swain. “Music was what I knew how to do and it was a way to put grief and loss into action.”

Then Swain lost her uncle and grandmother to cancer, and two Cape Cod friends were diagnosed with breast cancer, and she felt she had to do more. “I felt so powerless and I wanted to do something for my friends. I thought, okay, what are people with cancer not getting?”

In her search, Swain recognized a gap in local complementary care for people who are battling cancer, which led to the creation of her nonprofit, Cape Wellness Collaborative in 2014. The organization provides free integrative therapies, such as massage and acupuncture, to anyone on Cape Cod and the islands affected by cancer. So far Cape Wellness Collaborative has provided services to 800 locals.  Swain has also recently launched Wellness Eats, which provides  nutritious meals to people going through cancer treatment and their caregivers.

While engaging with this community through benefits and events (the nonprofit hosts the annual Dancing with the Docs gala), Swain had genetic testing done at Cape Cod Healthcare. The results signaled that she had a gene that could put her at risk for cancer, so she underwent a prophylactic double mastectomy and oophorectomy. “My mom died in her early 50s. I’m in my mid-forties. I looked at my three kids and thought, how could I not be there for them?” she asks.

On cue, Swain’s eldest, Lucy (15), arrives home from school, and prepares a quick snack in the open kitchen.  Siblings Jessie (13), and Stan (7) are expected soon, and will add to the happy busyness that is a typical day at the Swain house.

“You know, its funny. People ask me about ‘making it’ in music all the time.” Swain says, looking up to smile as her dogs greet Steve, who has come in from his art workshop, housed in their barn. He gives her a quick, cheerful hello before heading off toward the backyard. “I get to write and perform music with a fantastic band, work at Cape Wellness Collaborative with the most incredible people and have my family, all right here on this beautiful sandbar.” She pauses, spreads her arms out and grins. “So, I’ve already made it.”