For the Love of the Craft

A visit to Gannon & Benjamin Marine
Railway on Martha’s Vineyard

Inside Gannon & Benjamin Marine Railway on Martha’s Vineyard, it feels like a construction site has found its way into an old storied barn. Focused workers hammer and sand away, leaving trails and the scent of sawdust in their wakes as they rebuild an old yawl. The vessel, named Lark, was originally built for the Forbes family in the early twentieth century. Now, its current owner, John Kerry, has employed the crew at Gannon & Benjamin to restore it to its original glory.

It seems that every boat that finds its way onto the rails at Gannon & Benjamin arrives with a history. Many of the ships have sailed on distant seas, others have called Vineyard Haven Harbor home, and all are made of wood, and wood alone. “We drew that line in the very beginning,” says Ross Gannon, one of the founders. “Our harbor was full of wooden boats back then and it’s even more full now.” 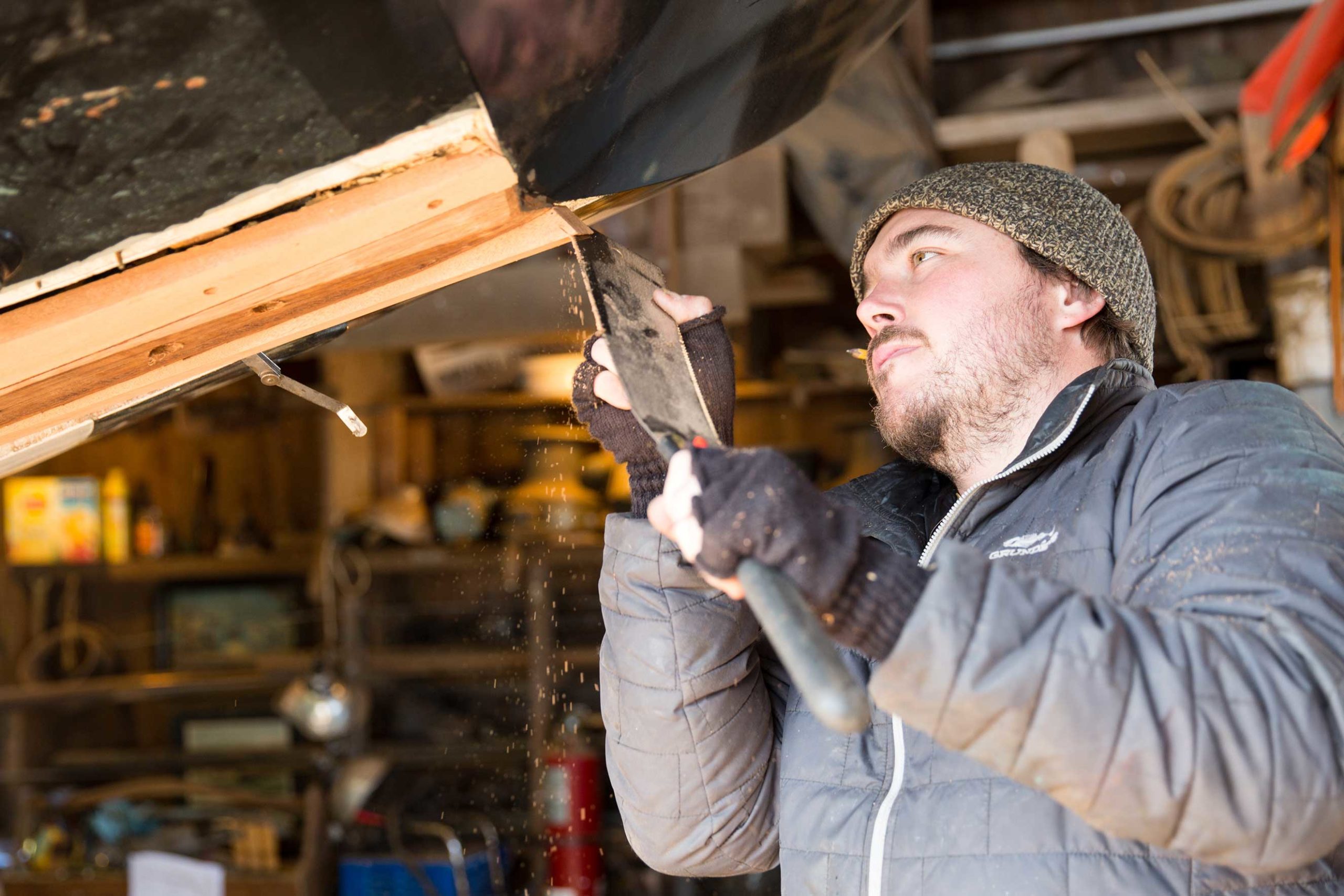 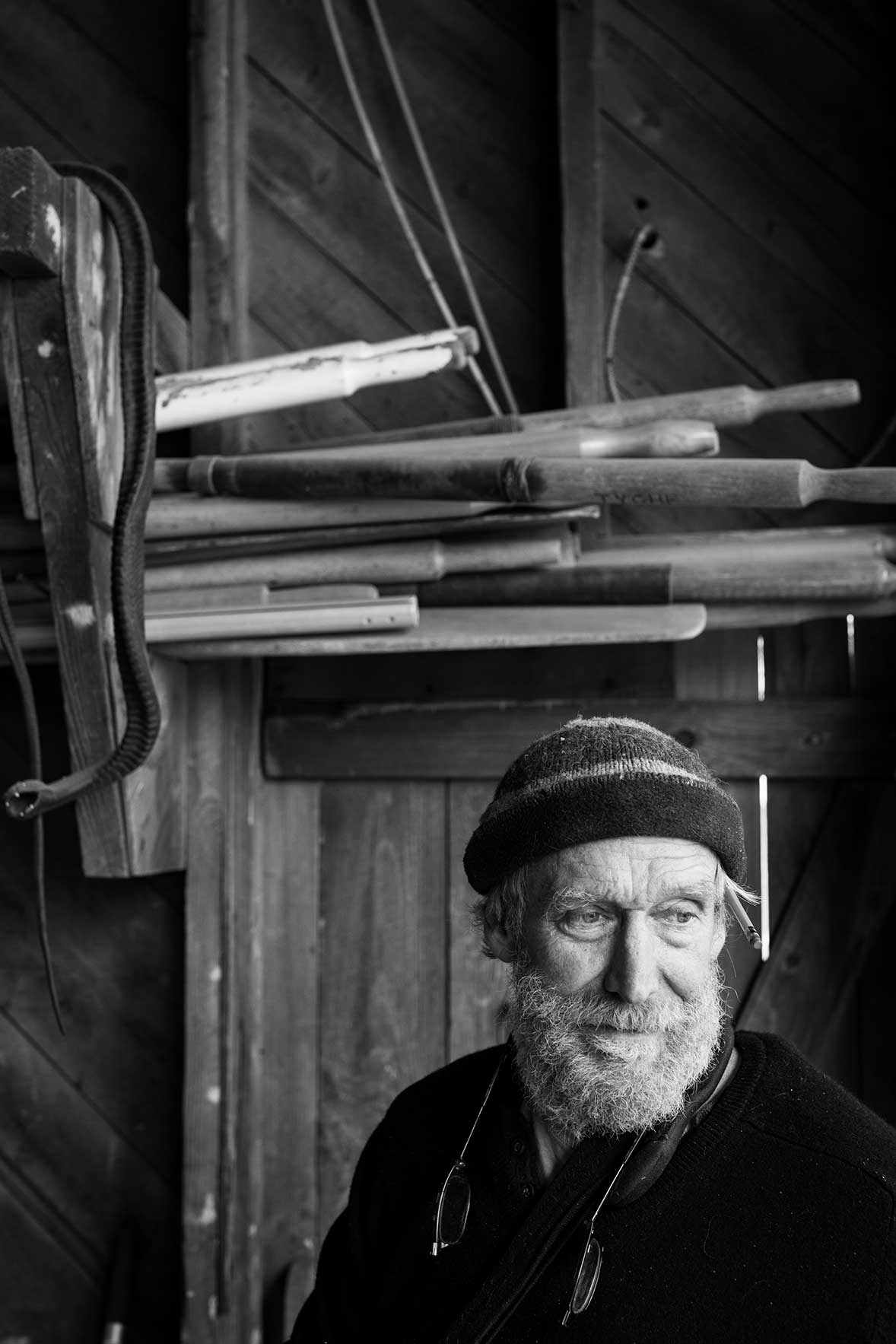 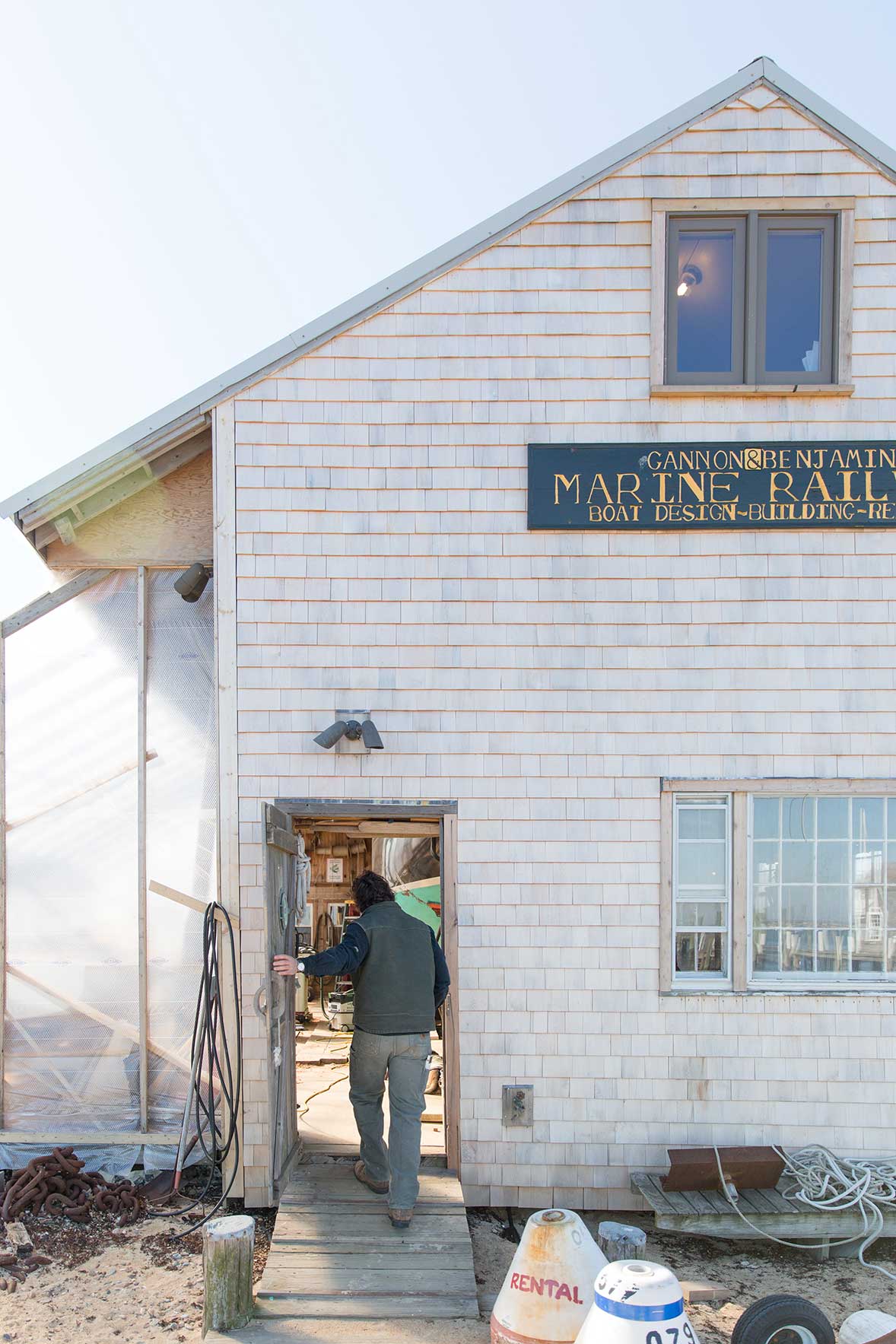 Owners Gannon, Nat Benjamin, and Brad Abbott are wooden-boat craftsmen. Using plank-on-frame construction, their projects range from small dinghies to 65-foot yachts. Since launching their business 40 years ago, they’ve designed and built close to 70 vessels, and oversee every aspect of wooden-boat construction from design to wood selection, construction, rigging, and outfitting.

Gannon and Benjamin were the original founders (Abbott joined their ranks in 2010), and the boatyard was initially a facility where wooden-boat owners could bring their vessels to work on, and if they required expertise, they could turn to Gannon or Benjamin. “When we started, we didn’t know if it would be successful enough,” says Benjamin. “We thought we’d have to do something else in the winter, but it’s never slowed down.” 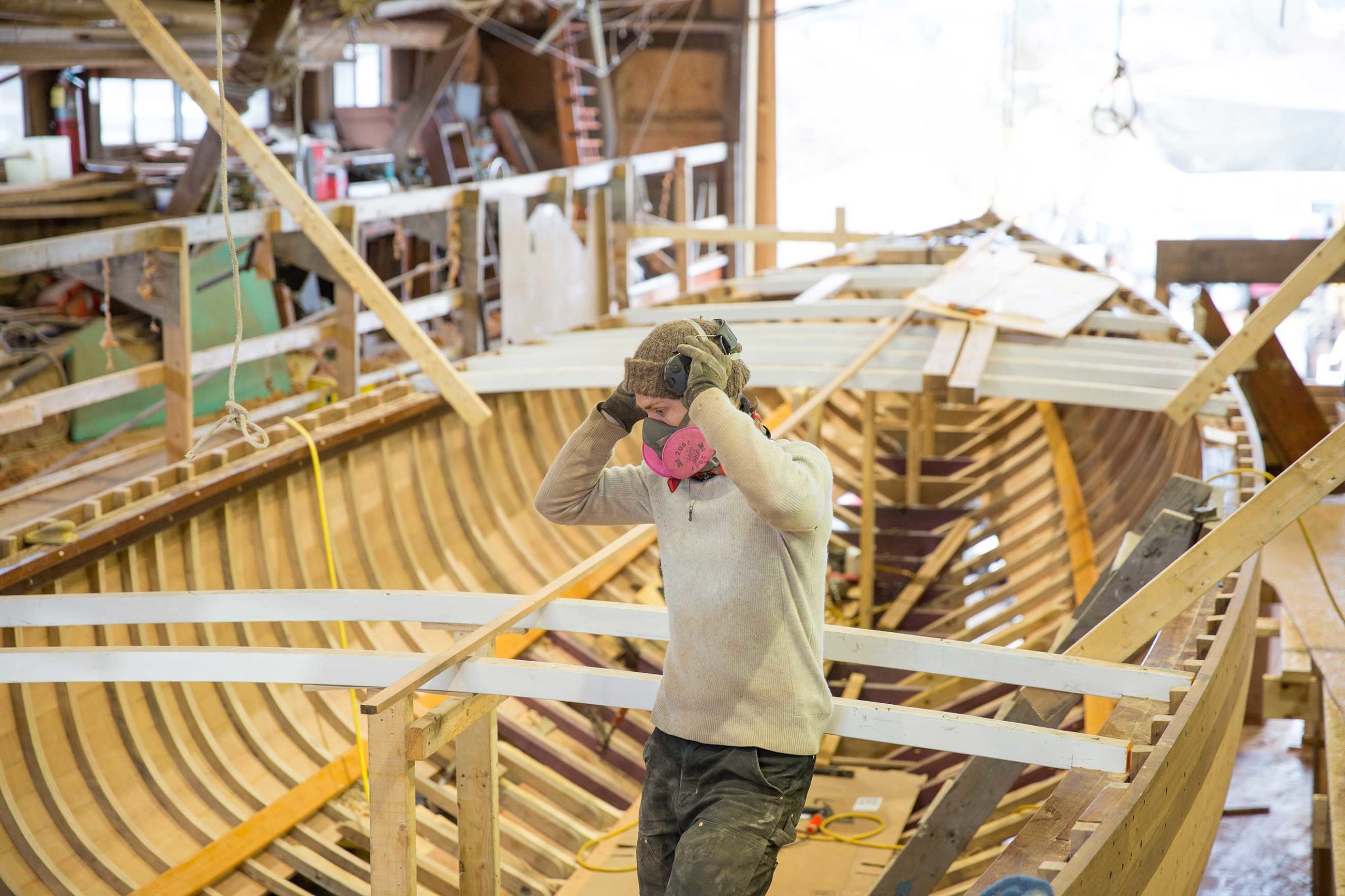 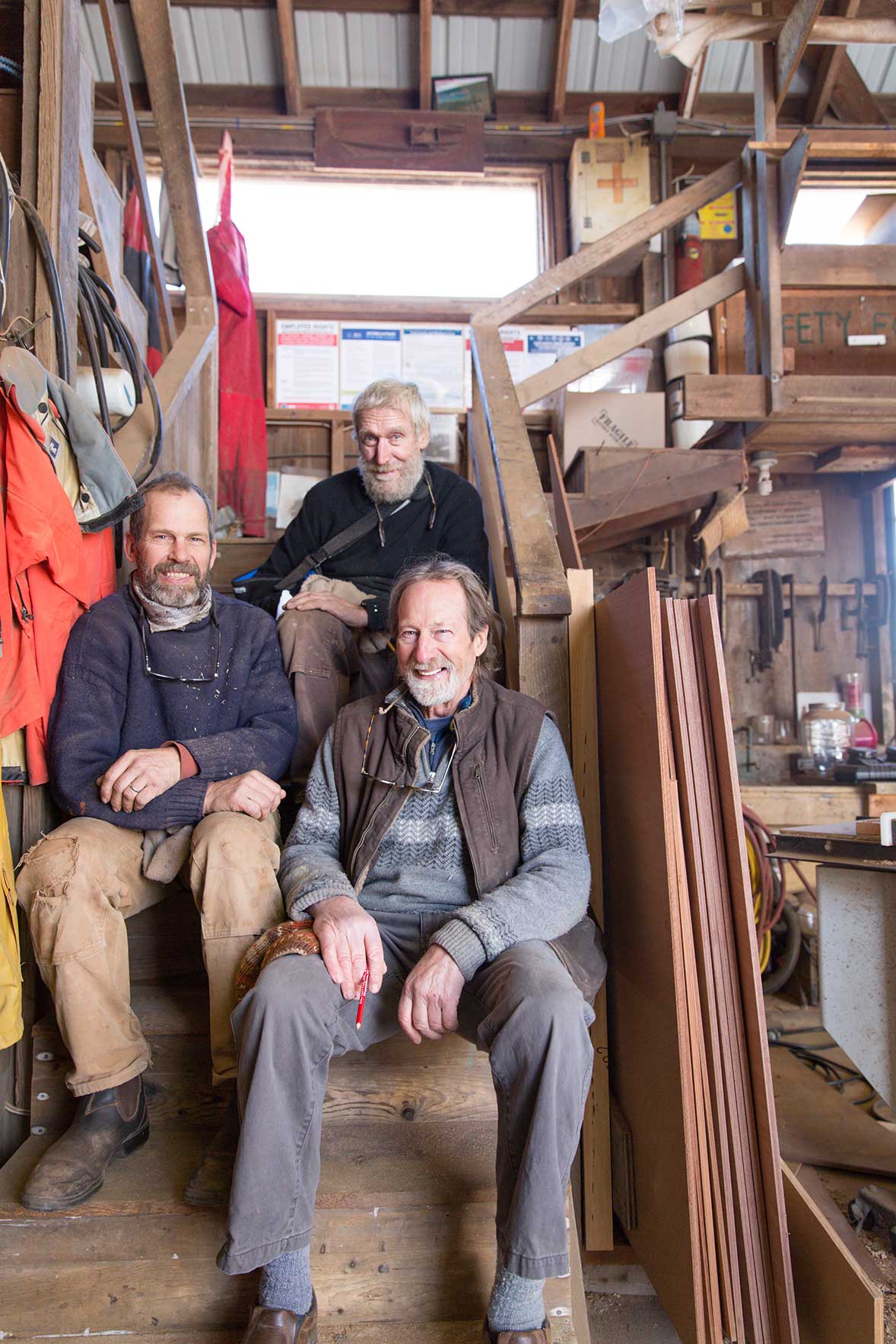 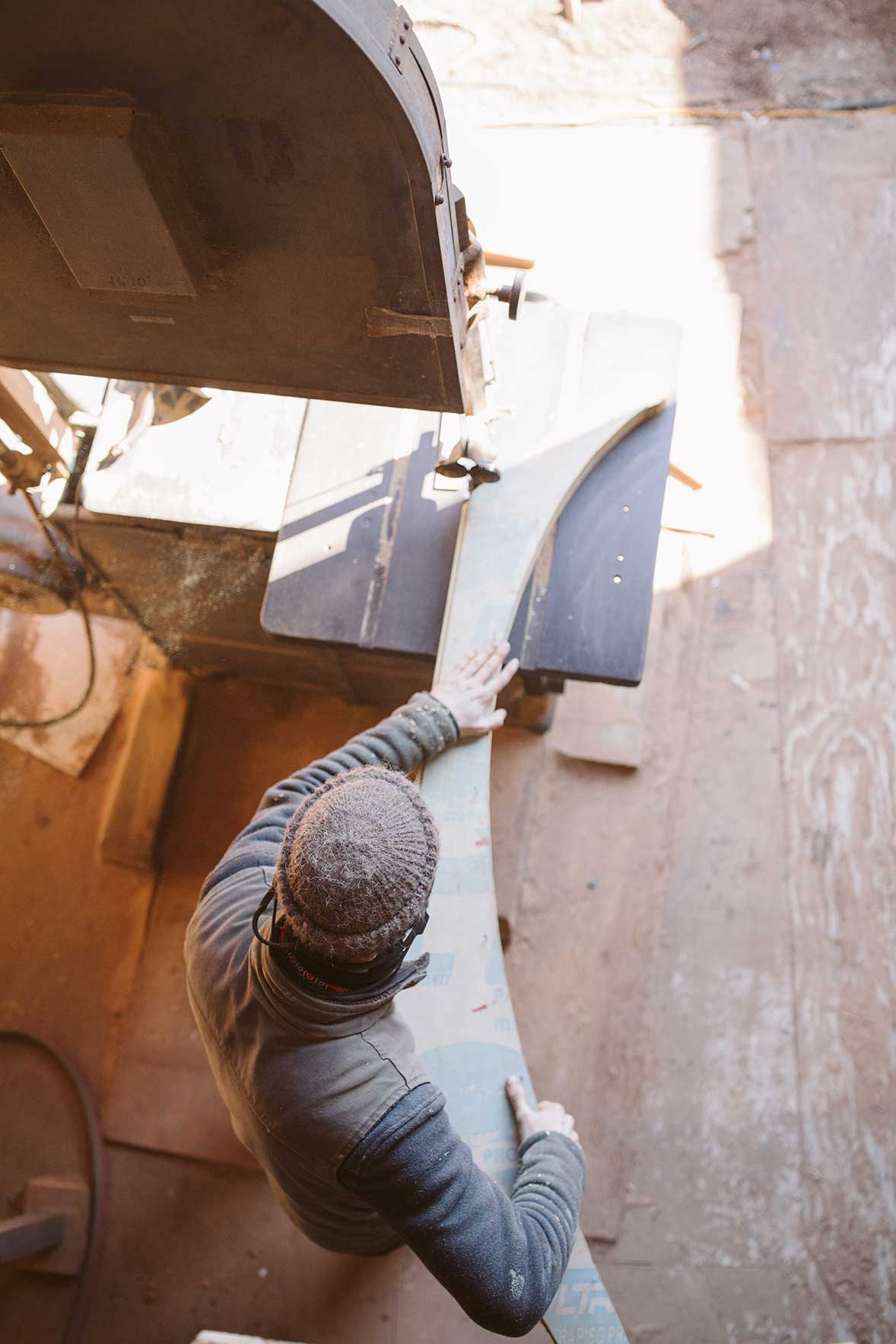 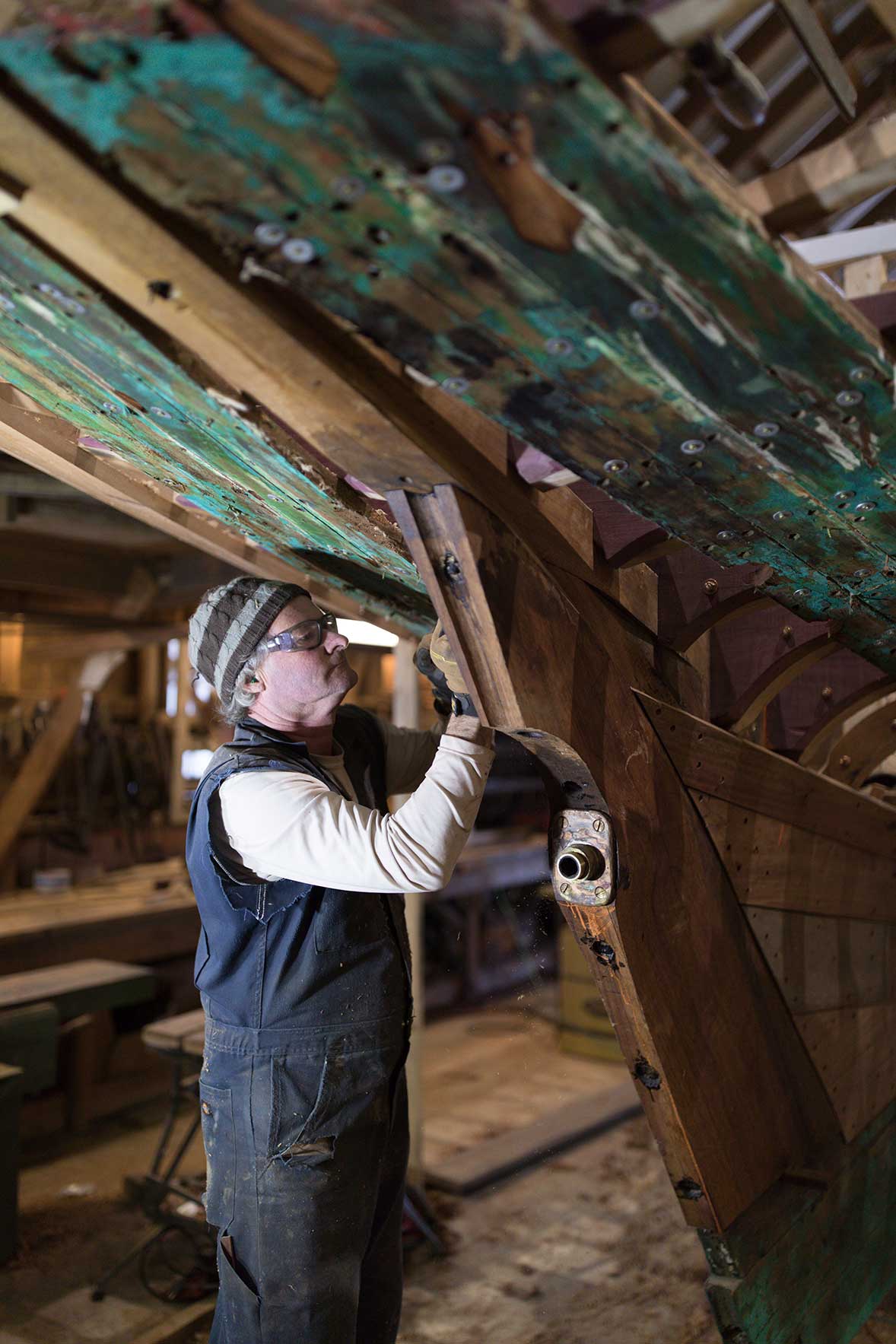 Currently, they employ about 16 workers year-round, but staffing can vary based on projects. Many craftsmen and women find their way to the boatyard for the promise of work, but many stay after discovering a knack and a passion. “You have to want to do this work, and if you have that drive, then it can be very rewarding,” says Abbott. “I mean, look around, we’re all standing here right now, and it’s starting to snow, yet here we are.”

Oftentimes, one vessel, especially one as big as Lark, requires the skills of many. Gannon & Benjamin works with local specialty craftsmen, including shipwrights, riggers, cabinetmakers, painters, mechanics, patternmakers, metal and foundry workers, sail makers, and more. With their varied skill sets, Gannon, Benjamin, and Abbott oversee every step of the process.

Nonetheless, in the very beginning, it was a two-man operation, and Gannon or Benjamin worked side by side and learned as they went along. “Neither of us went to boat-building school,” says Gannon. “The first boats we built were an experiment in learning. We picked up books when we needed to, and there were older men who we could tap if we needed information, but really by repairing boats, you learn a lot about building them.”

Today, New England is home to wooden-boat building schools, and many interns from around the world study at Gannon & Benjamin each year. “Learning is going on right now,” says Abbott, who points out a crew member who is visiting from Denmark. “Our crew is always made up of tiers of experience. We have backbone crew who have a lot of experience, but we’ve always got people who are interested in working on boats, interested in learning about how to work on boats, or interested in working—and if you can combine those three things, then that’s pretty good,” says Abbott. “There’s a lot of labor involved, but what is learned here, you can take wherever you go.”

Boat building is a skillset that can be taught—that’s evident from the scene inside Gannon and Benjamin. However, according to Gannon, the best part—the part that keeps one hammering and sanding, even on the coldest, least sailable days of the year—is the pursuit of mastery, and that is a lifelong commitment. “The more of this you do, the more excited you get about the craft that’s involved. Any boat builder will tell you that—you are just trying to get better and better and better. You’re trying to do your utmost to make these things long-lasting. To me, that’s always been the motivation,” says Gannon. 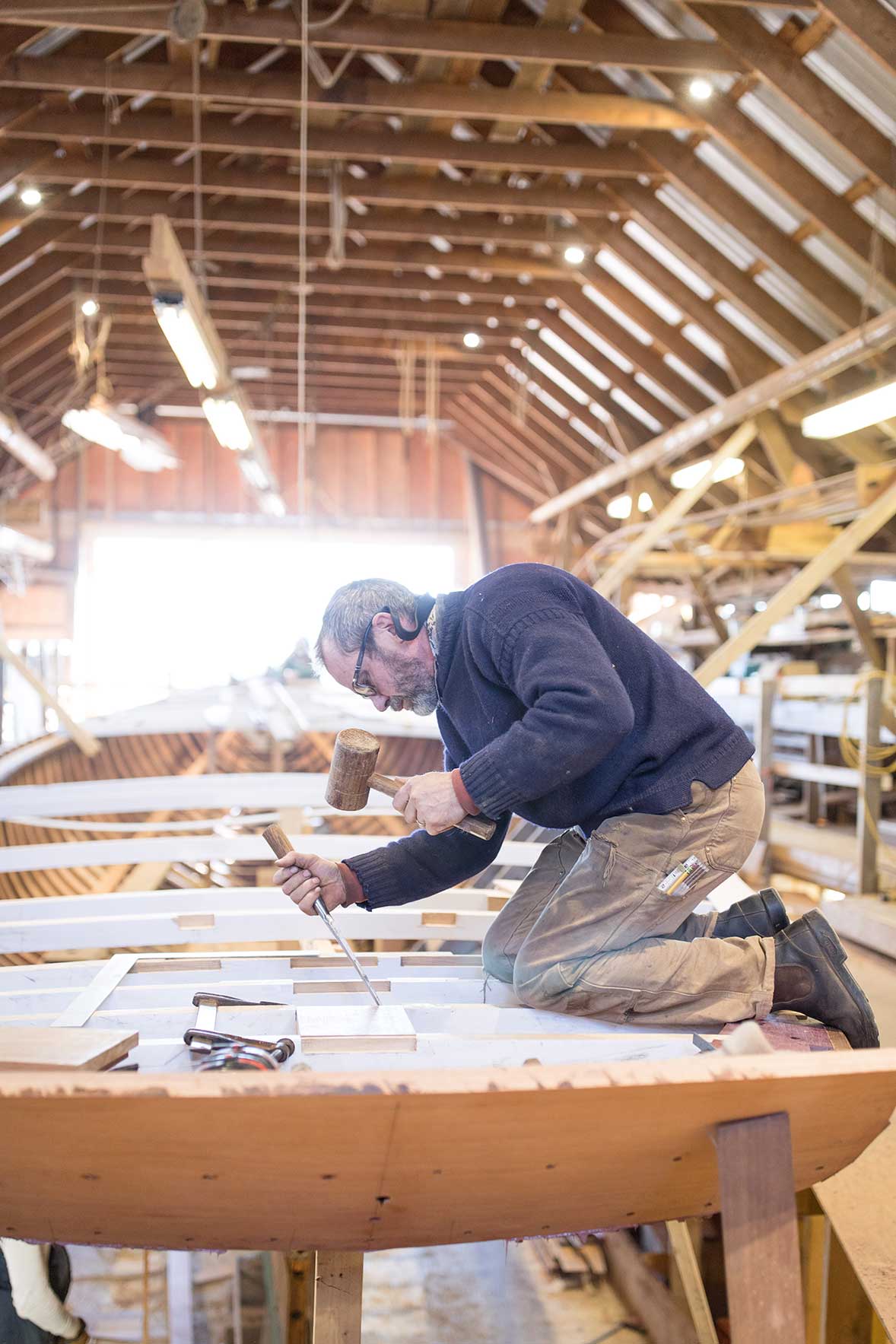 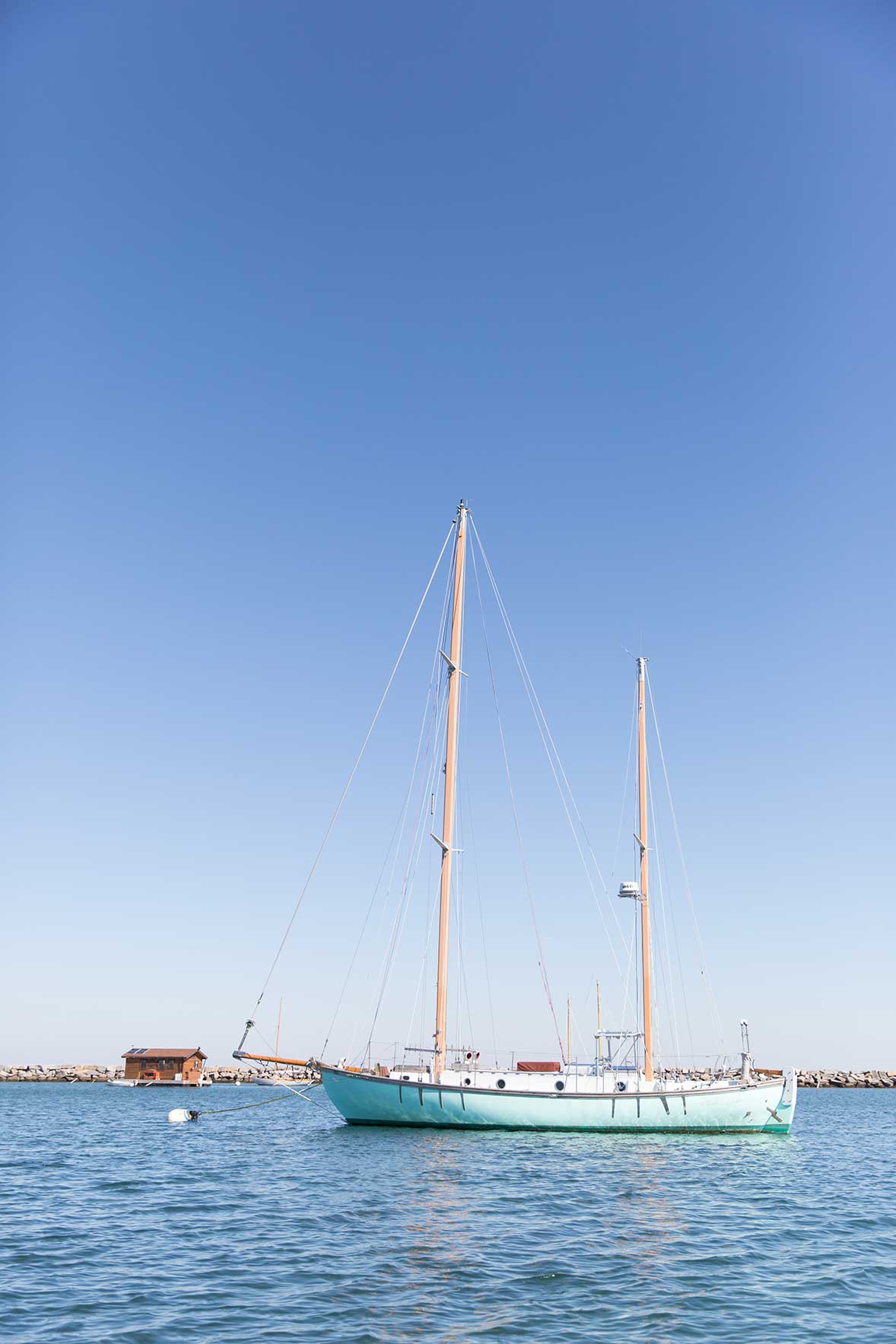 For more information on Gannon & Benjamin, and to learn about their public launches, visit their website at gannonandbenjamin.com. Gannon & Benjamin Marine Railway, 30 Beach Road, Vineyard Haven. 508.693.4658. 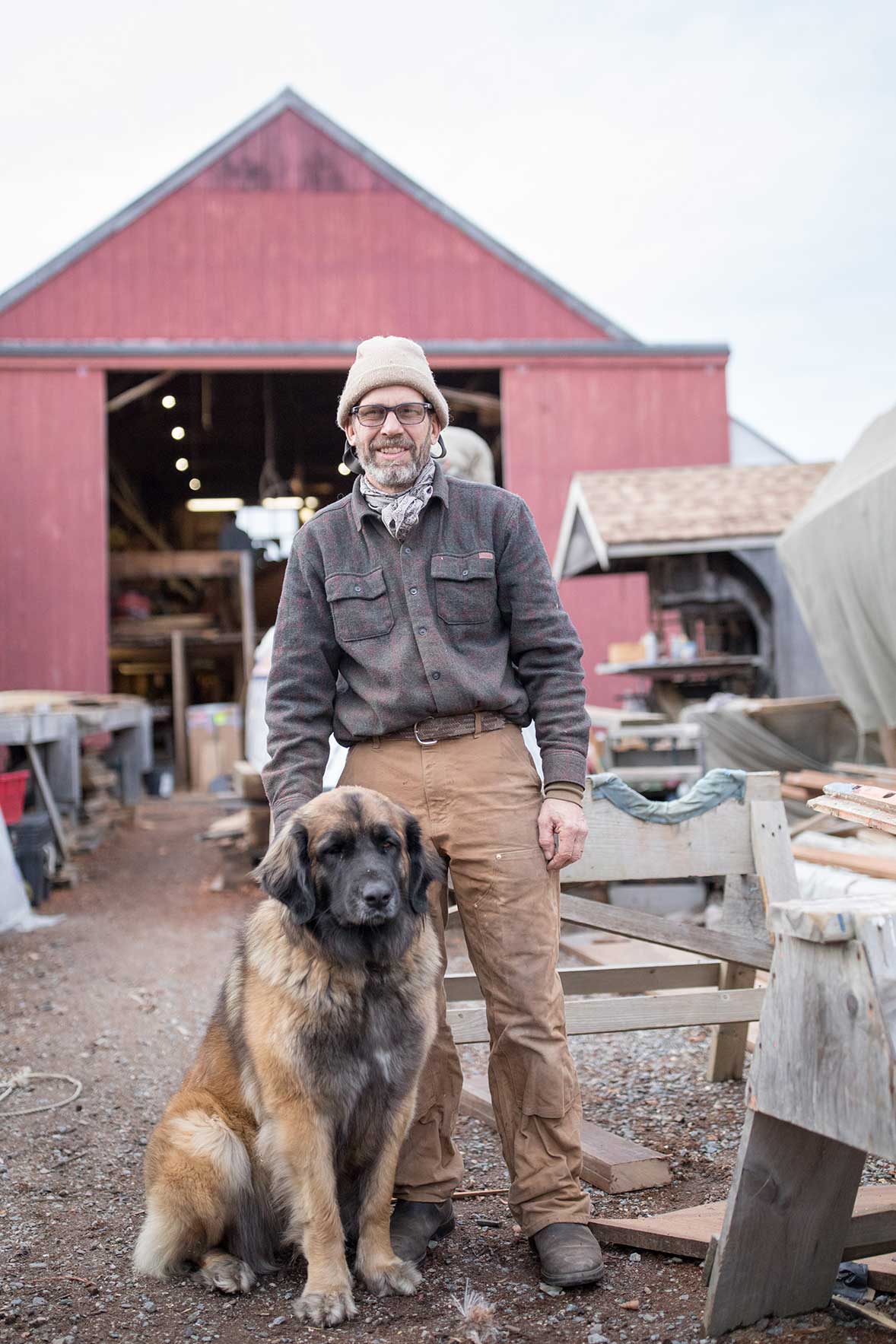