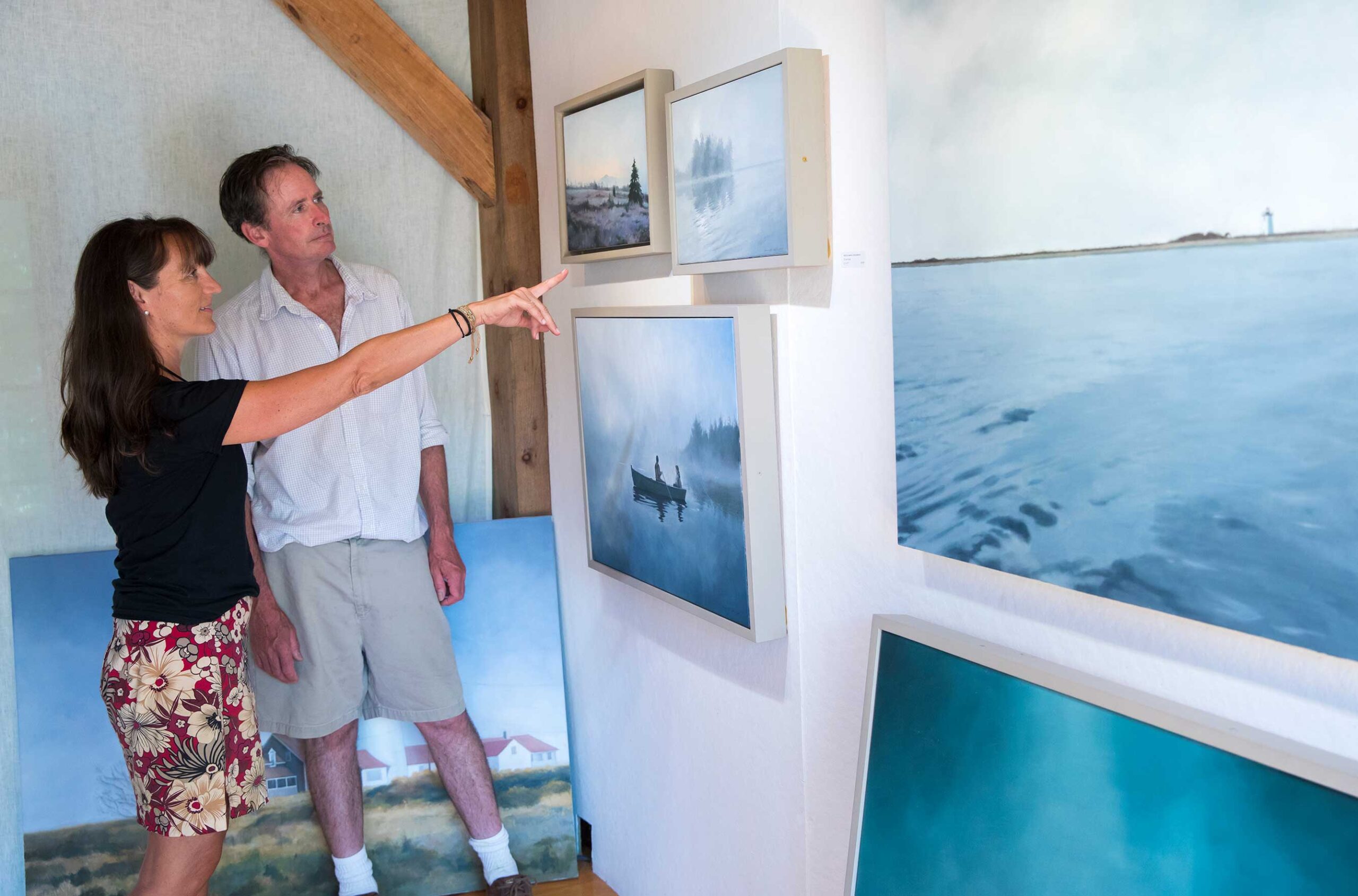 Thomas A.D. Watson and Francie Rudolph on raising their families and growing their businesses in towns defined by seasonal extremes.

Home to America’s oldest art colony, the Outer Cape has been a destination for fine artists and collectors for generations. Intimate galleries and studios pepper the main streets and back roads of these quaint seaside towns of Provincetown, Truro, and Wellfleet.

“The light out here is pretty extraordinary,” says Truro artist Thomas A.D. Watson, who is known for his representational landscape paintings of the area. “There is so much national seashore and wild water. It’s an incredibly beautiful place to live.”

Watson and his wife, Francie Randolph, a mixed-media artist and former Harvard professor, moved to Truro in 1998 after falling in love with a 200-year-old farmhouse with a small orchard and a two-story barn. The original deteriorating barn was replaced with a new post-and-beam structure that now houses Watson’s art studio on the upper level and Randolph’s studio below.

Watson was born into a family of artists—his father was a skilled illustrator, his grandfather was the founder and editor of American Artist Magazine, and his mother was a celebrated children’s book author. His childhood was split between Vermont and Truro, where he spent a great deal of time outdoors and the creative influences of his family and the surrounding community inspired his own artistic leanings. A graduate of Rhode Island School of Design, Watson’s landscape paintings depict the Outer Cape’s dramatic sand dunes and churning seas with stirring emotion. 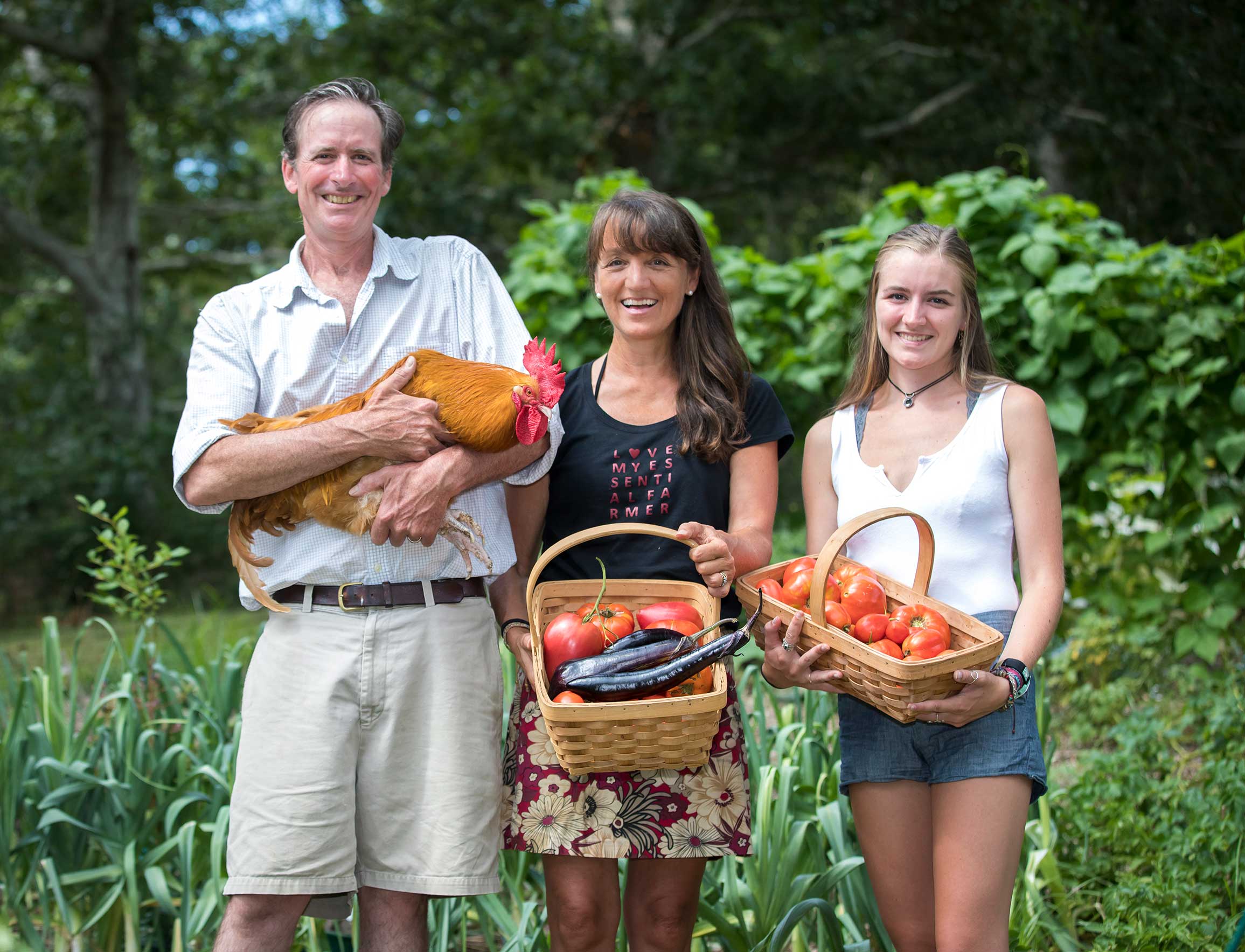 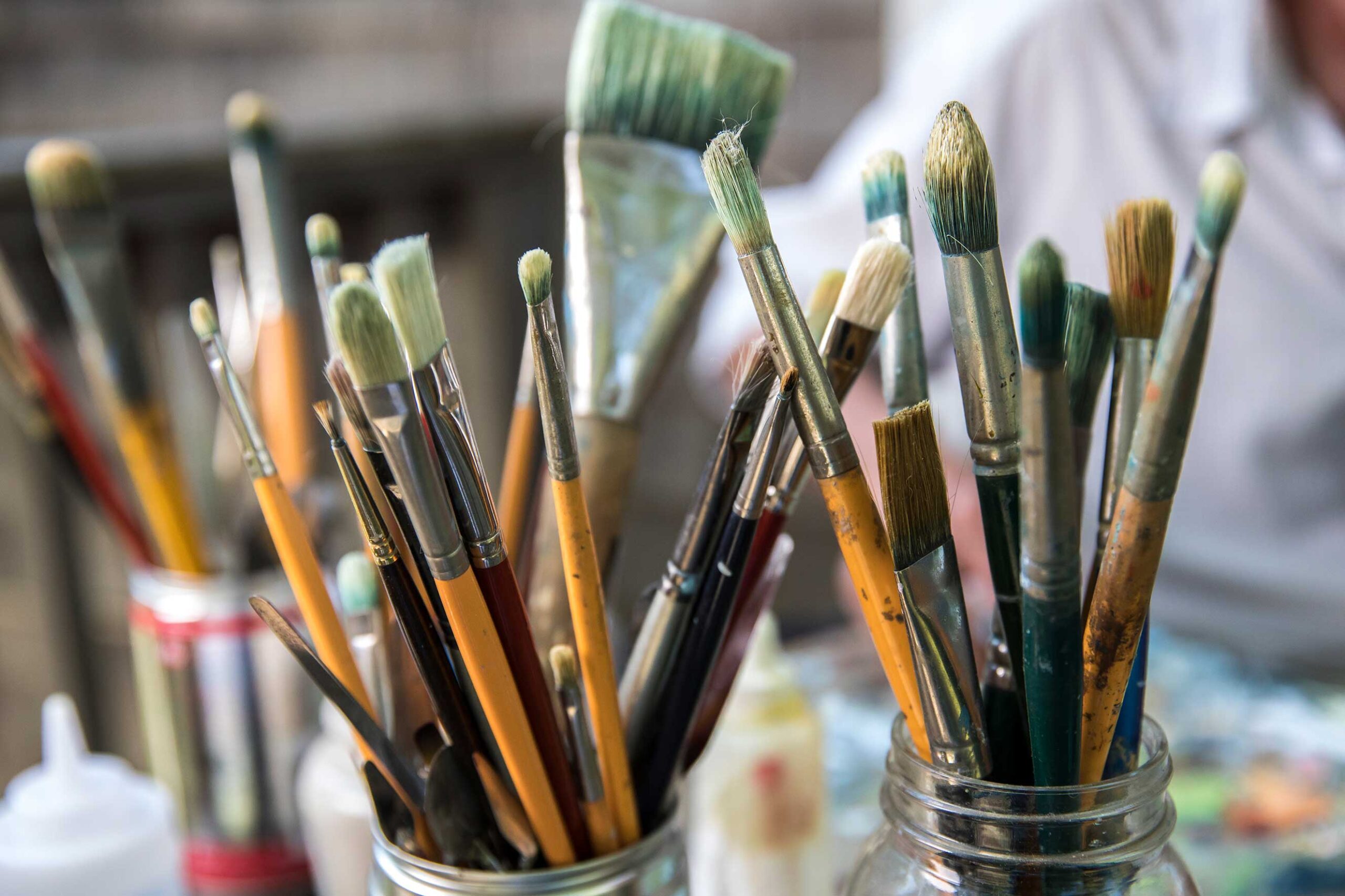 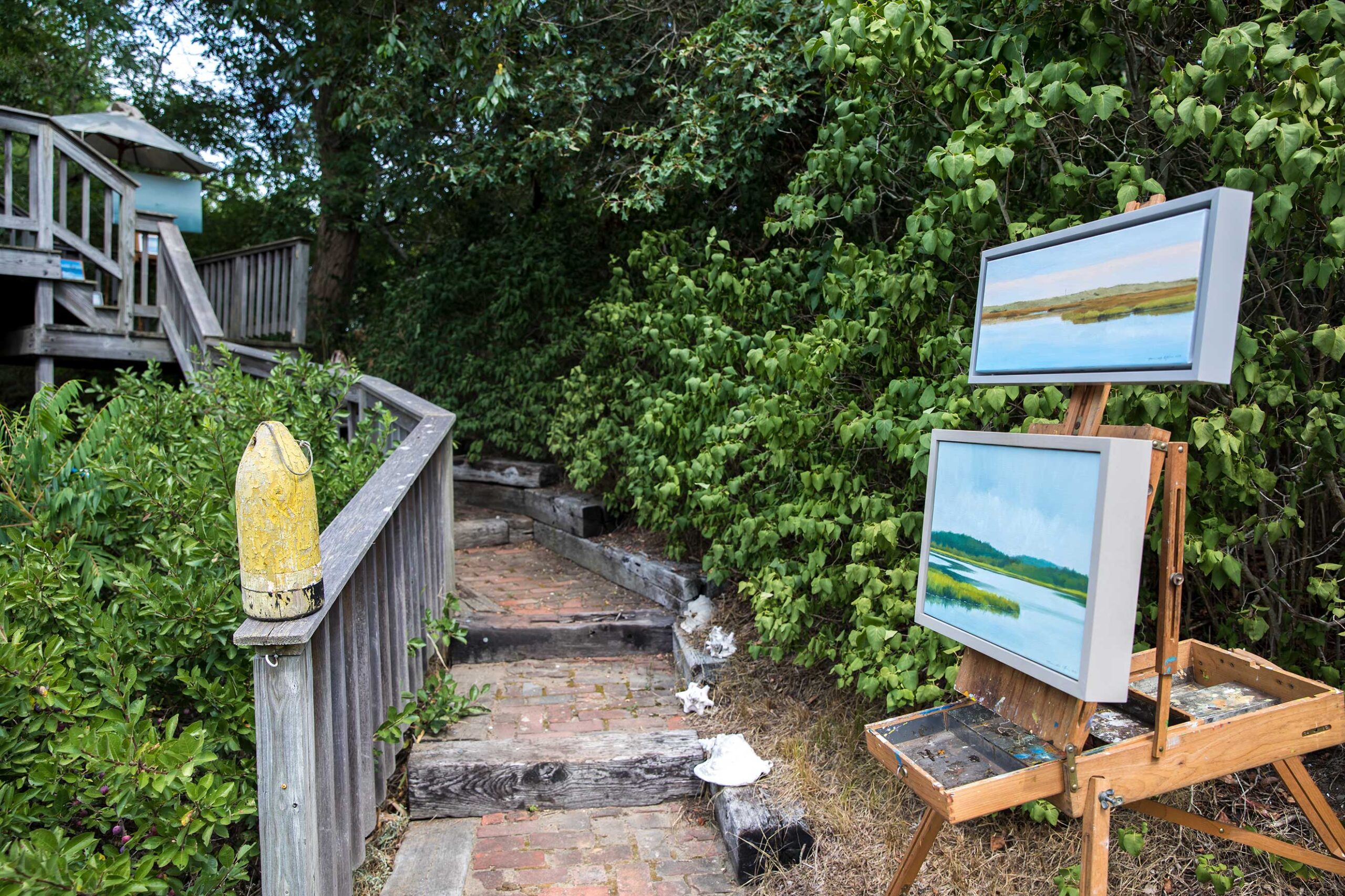 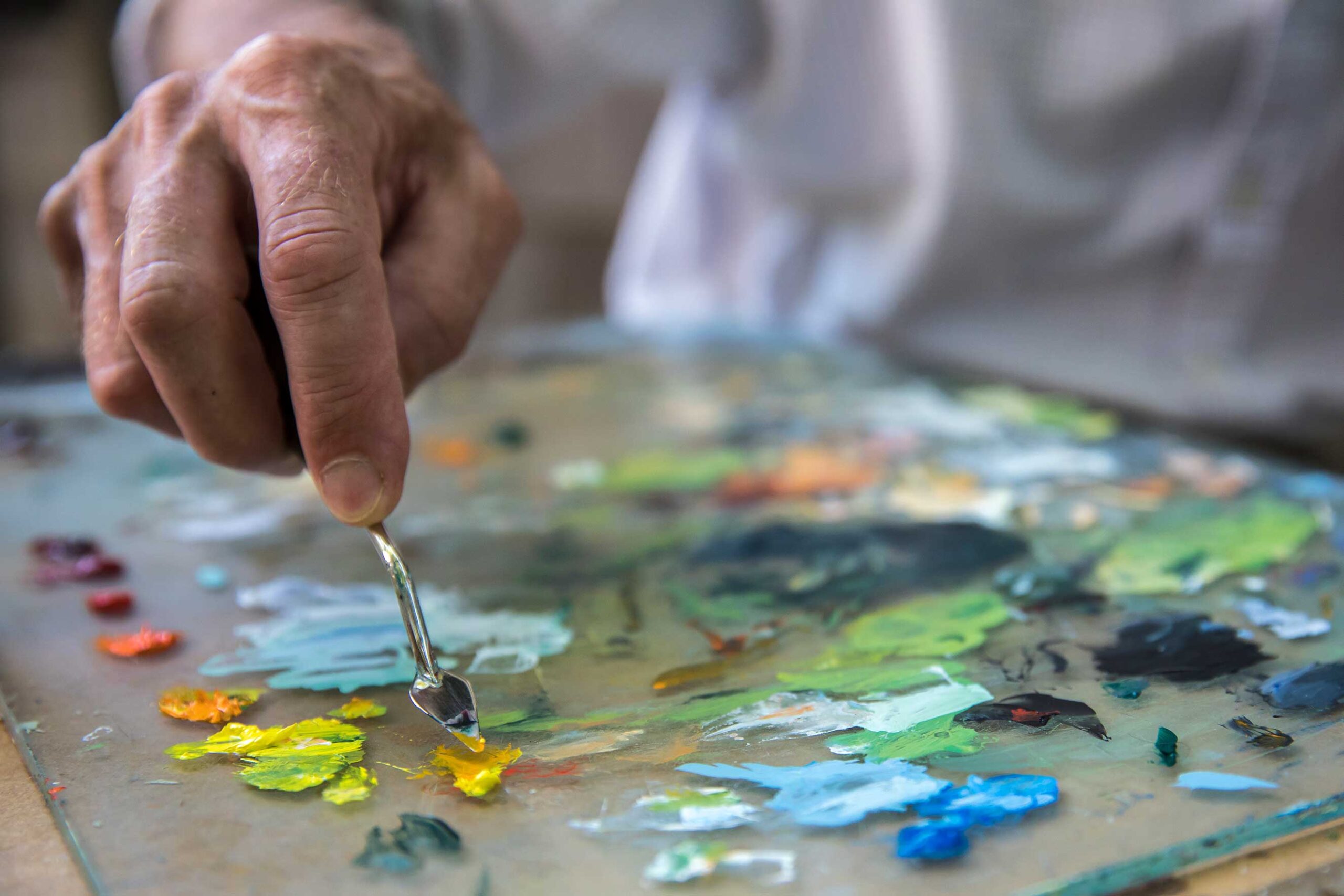 Randolph’s nature-based artwork combines digital technologies with painting, photography, and printmaking techniques. She previously taught at Harvard University’s Visual and Environmental Studies department before moving to the Cape and turning her attention to the local food movement. Randolph co-founded the Truro Agricultural Fair and shortly thereafter the nonprofit Sustainable CAPE. “Our mission is to celebrate local food while teaching about the health of our bodies, community, and environment,” says Randolph, who helps oversee the organization’s farm-to-school program as well as the Truro Farmers’ Market.

When they aren’t busy creating art, Watson and Randolph enjoy a down-to-earth lifestyle, spending their days gardening, swimming, and going on fishing trips with their son and daughter. One such outing into Cape Cod Bay inspired Watson to begin painting commercial fishing and lobster boats. The local fishing industry is an important part of the heritage of the Outer Cape and Watson’s images pay tribute to this local history. Earlier this year, his painting of a vessel known as the Joan ~ Tom was featured and auctioned off at the annual Provincetown Portuguese Festival.

”Our mission is to celebrate local food while teaching about the health of our bodies, community, and environment.

Somehow, while the rest of the world becomes increasingly dependent on their high-speed digital devices, Watson and Randolph have found a way to embrace life’s simple pleasures. “The rhythm of the seasons has been really wonderful because it gives us a lot of quiet time to do our work,” says Randolph. “We have a beautiful hearth and in the winter we will gather as a family in the living room and read books at the end of the day.”

Even during a global pandemic, Watson has found peace by painting his natural surroundings, and with every brushstroke, he is continuing a local legacy.